J.P. Morris is a confirmed bowhunter and the wild turkey is one of his favorite pursuits. He’s one of those... 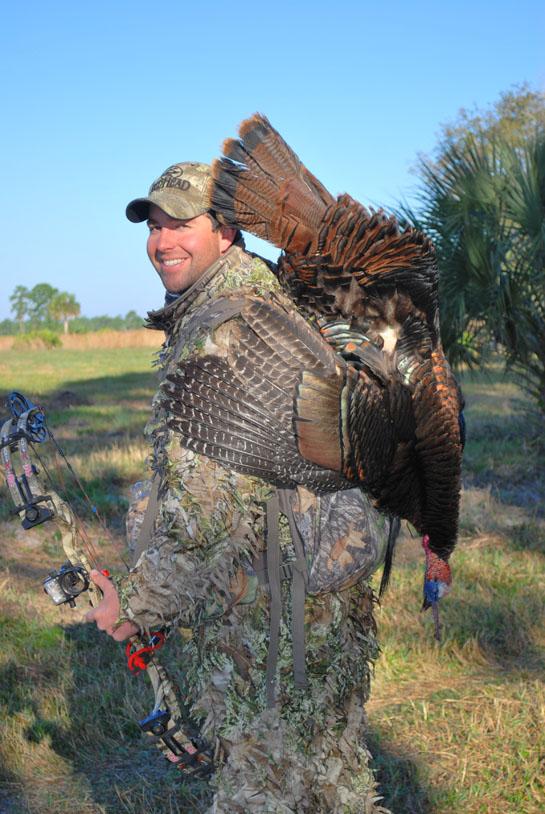 J.P. Morris is a confirmed bowhunter and the wild turkey is one of his favorite pursuits. He’s one of those guys who would rather miss a bird at 20 yards with a bow, than jelly-head him at 50 with a 12ga. He’s all about the challenge and last weekend the challenge was the Osceola turkey opener in South Florida.

Osceolas are one of the most sought after trophies in North America; and for good reason. They are hard to locate and can be downright tough to kill. Unlike Eastern birds that seem to gobble just to be heard, the Osceola tends to gobble good morning from the roost and then may just shut up for the rest of day. You know he’s out there, but never quite sure where. He’ll come to the call, but he can be slow on the approach and does a lot of watching and waiting. He is as likely to hang up as not and sometimes just seems to lose interest in anything you throw at him. It’s a tough hunt with a shotgun and as tough as they come with a bow.

I chuckled to myself when J.P announced he had a secret weapon for the hunt. He and the crew at Bass Pro Shops had come up with a motorized strutter decoy which would rotate at the push of a button. Got a gobbler on the way? Touch a handheld remote and your strutter decoy comes to life. He pivots left, then right, telling the entire world that “he’s in the house” and open for business. Like duck decoys that flap their wings, the motion gives your set up a real-life appearance and draws them like a moth to a flame. This was J.P.’s story and he was sticking to it. My job was to get him within calling distance of a bird.

As luck would have it, we struck a roosted gobbler at first light. The tom called from the tree, then again from the ground, then, in typical Osceola fashion, all was quiet. An hour went by before we saw the hens. They had our gobbler on a string and were leading him away and would miss us by 100 yards or so. J.P. hit the call and the lead hen stopped to look. She got one look at the real life Redhead Remote Strutter and charged the setup. The entire posse followed including the gobbler we had been looking for since daybreak. They covered a hundred yards in about 30 seconds with one rejected, dejected, and mad-as-hell gobbler bringing up the rear. He headed for the fake strutter and never saw J.P. draw–a second later he was flopping.

I’ve hunted a good many turkeys and can honestly say I have never seen birds come this hard and straight. The Bass Pro film crew filmed at least a dozen other birds that weekend and it was pretty much the same way each time. Maybe with time, real turkeys will learn all about decoys that move at the touch of a button, but for now reality rules.