Turkey Scouting: Birds Not Gobbling or Not There?

I, admittedly, enjoy turkey camp debates–even the heated ones. Perhaps my favorite is the one that begins something like this:... 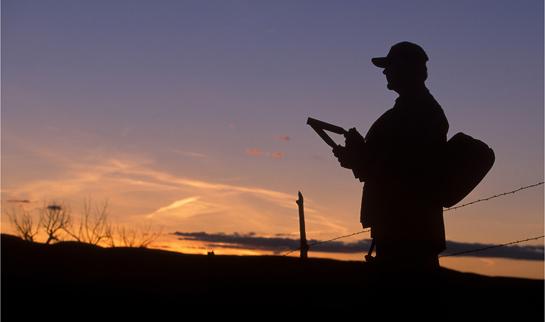 I, admittedly, enjoy turkey camp debates–even the heated ones. Perhaps my favorite is the one that begins something like this: “Been out there scouting every day, but I haven’t heard a thing. They’re really quiet this year. I think they’re henned up.”

Well, I don’t buy it. If there are gobblers in your hunting area, they will gobble early in the season–they can’t help themselves. If you’re not hearing birds, move on and find them.

So, I’ve come up with 3 rules for scouting turkeys that I try to abide by as each season approaches. For you guys who’ve already been chasing birds, give these hypotheses a thought. They work during the season, too.

1) Completely Disregard Old Information
I hear it dozens of times each spring: “Turkeys are everywhere.”

It’s not until you delve more deeply into those statements that you realize that those turkey sightings are weeks if not months old. When it comes to scouting spring birds, old reports are utterly useless. Birds won’t be in the same places now as they were then and the information you need is time sensitive.

2) Think Back Two Years
If you’re into turkey hunting, you’ll likely have a vivid recollection about the weather two springs ago. Why? Even in northern climes, where winter snow depth can impact turkey populations, wet, cold springs are the true turkey killer. Newly hatched poults cannot withstand long periods of chilly spring rain. Last year’s weather will impact jake numbers. The weather two spring’s ago will influence your population of two-year-olds–the toms that typically gobbler the hardest.

3) Find Your Top 10
Try to locate at least 10 gobblers before the season opens. That may sound like pie in the sky to some, but not nearly enough to others. In the weeks leading up to opening day, I’ll try to find at least that many gobblers in distinct locations–groups of toms together are counted as one. As the countdown to the opener marches on, I’ll re-check the birds noting where they’ve roosted and strutted most often. I also try to keep tabs on where they go after flying down. I’ll note, too, whether or not I see or hear other hunters scouting birds. Because the majority of my spring hunting is done on public land, finding some out-of-the-way birds is a top priority.

How many birds do you guys try to locate before the season opens?