When he ran into my set-up, the gobbler’s chest seemed unnaturally huge. I assumed it was because he was so... 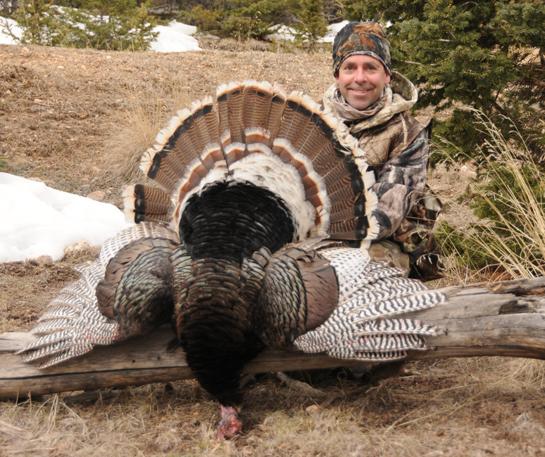 When he ran into my set-up, the gobbler’s chest seemed unnaturally huge. I assumed it was because he was so puffed up, ready to kick the grits out of the Cally Morris tom decoy posing in full strut.

But, later, when I checked my GPS and confirmed the elevation–10,400 feet above sea level–it occurred to me that the tom’s breast was so large because his lungs were freakishly big, an adaptation to living in that thin alpine air.

The New Mexico Merriam’s is easily the highest-altitude gobbler I’ve ever killed, and hunting him reminded me that high-country turkeys are different than their lowland brethren. Here’s what to keep in mind as you hunt gobblers above 5,000 feet.
**
STAY ON THE SUNNY SIDE**
In the mountains, you’ll often be hunting canyons that funnel birds from lower to higher elevations. When you call, set up on the side of the canyon that catches the sun. In the mornings, that’s typically the northern slopes of the canyons.
**
CALL WITH THE WINDS**
These mountain canyons are almost always windy. In the mornings, you can anticipate up-slope winds, and in the afternoons, the winds typically blow down canyons. Keep the prevailing winds in mind as you sound locator calls. Birds will hear you much better when you call with the wind. And remember the echo effect of your calls. If you call against the face of a steep canyon, you can literally bounce your call up side drainages and expand the reach of your searching calls.

USE OPTICS
The wide-open country of the West make good optics a turkey hunter’s best tool. On my New Mexico hunt, I was able to find birds by glassing more reliably than I found them with locator calls.
**
PULL ‘EM UPHILL**
In sloped country, birds often want to approach a set-up from below. This is a rule with plenty of exceptions, but more often than not, I’ve had better luck getting uphill of a gobbler and pulling him into a call than trying to suck him in downhill.

USE SHOOTING STICKS
I’ve been a fan of shooting sticks for a long time, ever since I took my first youngster hunting and watched his shotgun barrel wave like a flag. Sticks are especially valuable in steep country, where you can’t always rest your shotgun on a knee. Set up sticks so that your barrel faces your decoy spread, and you’ll be settled and ready when a gobbler comes in.

WEATHER’S THE WILD CARD
Lastly, hunt aggressively. If you have a responsive bird that won’t break for your call, go after him. The weather can turn so quickly in the mountains, turning a sunshiny day into a snowy, blowy afternoon, that you need to strike whenever you can, rather than playing cautious.

Photos from My Hunt…

Merriam’s country. Here’s where northern New Mexico’s wild turkeys live, in elk habitat. This basin ranges in elevation from 8,000 to over 11,000 feet above sea level.

We drove through several herds of elk to get to the sunny side of the basin, where we expected to find turkeys. At one point, I told my hunting partners, “I’ll eat my hat if there are turkeys this high.”

But my buddy Jimmy Wright parked on a logging road and struck his box call just as the sun was hitting the high slopes. A gobbler responded. I looked at my hat, but there was no time for dining. We had to get set up, just below the road.

This is the remains of our decoy spread after we called in the gobbler, along with a hen and a jake. The tom beat the stuffing out of Cally Morris’s strutting gobbler decoy, breaking its neck with a wingbone chop, and then spurring the tar out of it. The gobbler then turned his attention to the jake, which was trying to mount Cally’s hen decoy. The tom beat up the jake, then got on top of the hen decoy and was trying to breed it when I hit an alarm putt. I wanted the gobbler to stretch out his neck and give me a good shot. Instead, the gobbler gobbled, while he was in full breeding mode. So I killed him, figuring he was at least going out on top.