Hunting Tips: 4 Ways to Put the Sneak on Turkeys

Sometimes turkeys come to us, but there are times when stubborn longbeards just won’t budge. That’s when savvy hunters pull... 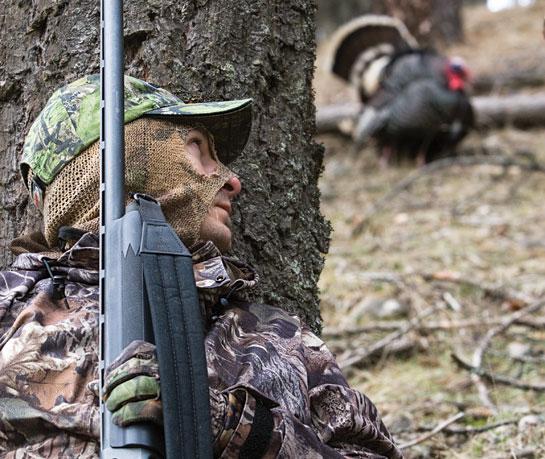 Sometimes turkeys come to us, but there are times when stubborn longbeards just won’t budge. That’s when savvy hunters pull out the stops and put on the sneak.

1. Crawling
First Move: Be patient. Slow down. Fail and you might not get a second chance.

Next Step: Move when the strutter faces away and his head is hidden by the big tail fan you want on your wall. Study the gobbler’s movements, then act. Hide behind terrain. Inch forward as flocked-up turkeys’ eyes look elsewhere.

Close the Deal: Want it badly enough? Put your face in the grass, dirt, mud, cow patties—anything to bring that gobbler home.

One Last Thing: Wait for a drizzly morning when rain will soften your approach.

2. Decoying
First Move: Sure, you could just crawl, but try it with a turkey decoy, which may get the attention of, but not alarm, live birds. Sidle like a snake, using the decoy to slip inside the turkey’s comfort zone.

Next Step: Give a turkey decoy pulley system a shot. Zink’s Turkey Decoy Motion system sets up quickly and lets you add realism to your setup from several yards away.

Close the Deal: The fired-up bird gobbles hard. Hear spitting and drumming just over the rise, and the crunch of steps coming closer? Good. Slowly raise your shotgun, take aim, and shoot that gobbler when you positively identify his bright head.

One Last Thing: When closing ground, always use existing terrain to your advantage, whether it is a rise in a hill or a dip in a field.

3. Calling
First Move: Crawl and call. Cluck and yelp on your way to the gobbler.
Next step: Stay silent if you don’t want turkeys to look your way.

Close the Deal: Stay on your feet and move from tree to tree while calling. Clucks and purrs will put the birds at ease, and they’ll tolerate your presence.

One Last Thing: Don’t get caught with your gun down. Stay ready in case the gobbler breaks and runs your way.

4. Fanning
First Move: Got a gobbler who won’t budge? Move on that bird slowly, belly-down, with a turkey tail fan in front of you—every inch closer counts.

Next Step: This mock display of strutting is particularly effective as you slip in. Hide the tail fan. Show it. Hide it again.

Close the Deal: A gobbler may begin slowly walking and strutting toward you. Hens might advance on a fanned-out turkey tail too, pulling a trailing longbeard into range.

One Last Thing: Attach a tail fan to your bow to free up your hands.

Know Before You Go
Some of these tactics may be illegal where you hunt. Be sure to check local regulations before heading afield. Also, be advised to use extra caution with these techniques. Never employ them on public land.