Although winter continues its stranglehold on much of the country, spring is inevitable and turkey seasons are already beginning to... 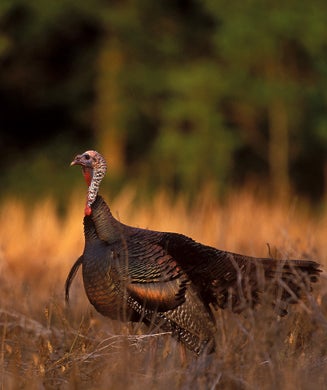 Although winter continues its stranglehold on much of the country, spring is inevitable and turkey seasons are already beginning to open. So what can you expect this season? One of the best places to get a state-by-state forecast for the 2014 spring turkey hunting season is from the National Wild Turkey Federation (NWTF). The guru of turkey information is Dr. James Earl Kennamer, the chief conservation officer for the NWTF who collects forecasts from biologists in each state every year. Several key states best reflect the turkey forecast for each region.

Oregon (www.oregon.gov)
2013 Harvest: 3,878
Brood Rearing/Poult Production: An average 2012 spring made for good conditions for poult production. Oregon experienced the driest July on record, which translated into an abundant grasshopper crop for the turkey poults. A temperate 2013 fall helped too.
Hunting Forecast: A long winter may limit vehicle travel in the forests. Follow the snow line up as warmer weather moves into the region. It is unknown if heavy snowfall and cold winter have affected the turkey population.

Arizona (www.az.gov)
Estimated Population: 36,000
2013 Harvest: 833
Brood Rearing/Poult Production: Brood rearing and poult production varies depending on elevation and precipitation. Poult production and survival in Units 1 and 27 (impacted by the Wallow fire) exhibited a poult-to-hen ratio well above the long- term average. Eastern Arizona had good poult production and survival and good acorn crops during the summer of 2013.
Hunting Forecast: Look for recent burns, recovering vegetation, and areas well away from heavily traveled roads to find birds.

Minnesota: (www.mn.gov)
2013 Harvest: 10,390
Brood Rearing/Poult Production: Late cold and snow during the spring of 2012-2013 lead to a loss of hens’ nests, and the turkey hatch was lower than expected.
Hunting Forecast: The number of birds will be lower than last year.
Inside Info: Central Minnesota has a good mix of forests and farmlands, including several wildlife management areas and waterfowl production areas and is often overlooked by turkey hunters.

Iowa (www.iowa.gov)
Estimated Population: 150,000
2013 Harvest: 10,565
Brood Rearing/Poult Production: Nesting and brood-rearing conditions were average to poor in 2013 with the most notable decline in reproduction in the northeastern part of the state.
Hunting Forecast: Iowa’s turkey population is well-distributed throughout the state, and the increase in turkey populations two years ago will provide productive hunting potential.
Inside Info: North-central Iowa has the best turkey numbers, but public land is limited.

Indiana (www.in.gov)
2013 Harvest: 11,374
Brood Rearing/Poult Production: The 10 percent harvest decrease in 2013 was related to inclement wet, cool weather, even in June and July.
Hunting Forecast: Turkey hunting in 2014 should be fair to good.
Inside Info: Consider hunting the upper Wabash River reservoir areas like Mississinewa Lake, Salamonie Lake, and the J.Edward Roush Fish and Wildlife Area.

Ohio (www.ohio.gov)
Estimated Population: 180,000
2013 Harvest: 18,409
Brood Rearing/Poult Production: Reproduction numbers in 2013 were relatively good. However, heavy rains in parts of the state in June may have impacted poult survival.
Hunting Forecast: Because Ohio had good reproduction in 2012, two-year-old birds should be relatively abundant.
Inside Info: Check out the Wayne National Forest and other large state wildlife areas and state forests.

Pennsylvania (www.pa.gov)
Population: 191,000
2013 Harvest: 34,158
Brood Rearing/Poult Production: Brood production in 2013 was below average with some exceptions, but older gobblers are fairly abundant.
Hunting Forecast: Turkey numbers are down, but there are still plenty of turkeys available. Gobbling activity may be suppressed by the lack of 2-year-old birds.
Inside Info: Try State Game Lands (SGL) 217 in Berks County, SGL 211 in Schuylkill County, SGL 87 in Luzerne County, the Delaware State Forest, the Delaware Water Gap National Recreation Area, SGL 13 and 57 in Wyoming and Sullivan counties the Tuscarora State Forest, SGL 232 and the Allegheny National Forest.

Virginia (www.virginia.gov)
Estimated Population: 155,000
2013 Harvest: 19,265
Brood Rearing/Poult Production: Brood production was down in 2012, but good results in 2013 should mean above-average hunter success.
Hunting Forecast: The number of two-year-old turkeys available in 2014 is lower, but there will be numbers of three-year old birds.
Inside Info: Turkey populations have declined in counties east of the Blue Ridge. Don’t overlook hunting public lands.

Georgia (www.georgia.gov)
Estimated Population: 325,000
2013 Harvest: 35,000
Brood Rearing/Poult Production: Poult production has been poor for the past 5 years, although up slightly in 2013. Jakes should be abundant in the mountains of northern Georgia. The Piedmont should have some mature birds. The upper coastal plain’s reproduction is on a slightly upward trend with turkey numbers comparable to the past several years. The lower coastal plain has seen a decline in poult and brood production.
Hunting Forecast: A record harvest took place in 2013.
Inside Info: Find recent prescribed burns for their exposed insects and acorns and good brood rearing sites.

As of this writing, winter survival reports are inconclusive.