Photos by Andrew McKean Aunt Linda has a problem, but it’s solvable. She needs us to shoot different turkey guns.... 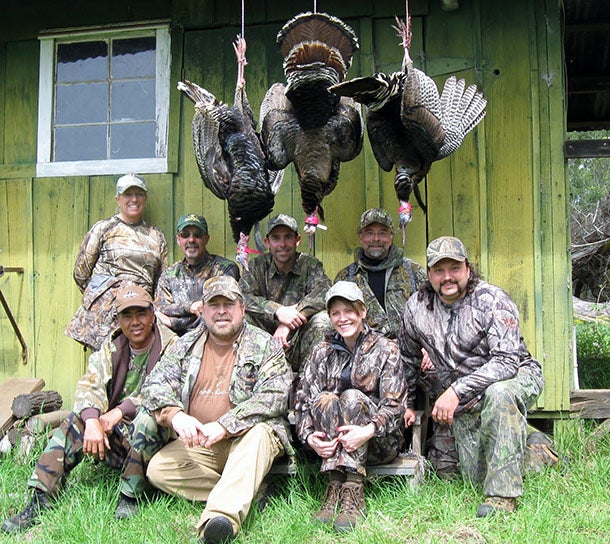 Aunt Linda has a problem, but it’s solvable. She needs us to shoot different turkey guns.

The matriarch of our little group, Linda Powell, has switched jobs, moving from handling media relations for Remington Arms to a similar gig with Mossberg. So we dutifully trade our field-worn 870s for pump-action Mossbergs. The new Flex would be a good choice, Linda says, and would I be interested in trying one out on Mexican gobblers?

Uncle Ray’s problem is more personal. He has lost his feral clown mask, and a spring turkey hunt without Ray Eye’s disturbing fanged clown getup is like a train wreck without the train. He had the hideous heirloom in Hawaii, where he wore it everywhere–even to the beach–but he can’t find it for our upcoming trip to the Yucatan to hunt ocellated toms.

Gordy, as always, commits early and enthusiastically to our trip to Mexico, but he’ll have to schedule around deadlines. In the Yucatan, we’ll share a room, as we’ve done in the shadow of Wyoming’s Devils Tower, on Hawaii’s Kona Coast, and stops in between, and we’ll talk into the night about bird dogs and shotguns and the challenges of running magazines in a digital age. And Karen is in, although she’s preoccupied with work and her upcoming marriage.

Meet the Fellowship of the Wing, a group of turkey hunters that has, year by year, closed in on a grand slam of gobblers, collecting subspecies from such varied places as the South Pacific and the Gulf of Mexico. Along the way, we’ve gathered something else: a sense of identity. We aren’t related and are bound really only by our employment in the hunting industry. But together we operate something like a family, generating our own cheerful energy and galvanized by a sense that hunting turkeys together is a richer experience than hunting apart.

Ours is a relationship that was germinated in and is sustained by spring turkey country. As we’ve traveled and hunted in each other’s company, each of us has adopted a role that would be recognizable in any family. And just like any expedition of an extended family, some of our most memorable experiences have come from the journey, not the destination.

Family Ties
Linda Powell is our muse and sponsor, picking our destinations and arranging the logistics. It was Linda who brought us together. Whether for Remington or Mossberg, it’s her job to introduce new products to the folks who write about them. In fact, our club formed around an opportunity to field-test a new turkey-hunting configuration of the 870 five years ago.

But like any matriarch, Linda takes her role beyond engineering our trips. She’s also the connective tissue between each of us, who might go months without calling or e-mailing. But Aunt Linda sends Christmas cards and lets the rest of us know when one of our party is particularly ailing or thriving. It’s Linda, of course, who represents our turkey-hunting group at Karen Mehall’s wedding.

Ray Eye is equal parts court jester and huntmaster. He brings his video camera to document the proceedings. Uncle Ray, who helps with marketing for various outdoor companies and also writes and photographs for his “Eye on the Outdoors” multimedia programs, has more turkey-hunting experience than the rest of us put together. But in our group he’s less adult than impish child, full of fun and mischief.

Gordy Krahn, the editor-in-chief of North American Hunter, is the big brother, quick of wit, sharp of eye, and ever ready to lend a hand. Karen Mehall (now Phillips, since her marriage last summer) is an editor with the NRA’s American Hunter, and she fills the role of our collective little sister, a little flighty and frequently flustered, but a tenacious hunter who leavens any situation with her sense of humor.

She’s also one of the most accident-prone people I’ve ever met. If anyone is going to step on the tines of a rake and whack her face with the handle, it’s Karen. In Hawaii our group rented a house for a week on the steep hills of Kona. One morning Karen turned an ankle and rolled several times down the slope. She suffered a sprain that required emergency medical treatment and kept her off her feet for months afterward.

Freelance writer and photographer Mark Strand is the analytic Boy Scout brother of our group, thinking through contingencies and exercising better judgment than the rest of us. If you need a spare shotgun shell or your digital camera is on the fritz, Mark can probably help out.

Then there’s me, a relative latecomer to the group. I joined them in Wyoming, a year after they initiated the fraternity with a Gould’s turkey hunt in Mexico. I never imagined having the opportunity to hunt turkeys in so many time zones and habitats, let alone sharing the experience with the same folks. But as I threw in with this crew, it seemed natural that if I was going to hunt turkeys anywhere, it was probably going to be with this clan.

We’ve accumulated memories, photographs, and mementos: plastic leis from Hawaii, a Minnie Mouse purse from Florida, T-shirts and traditional recipes from Mexico. And we’ve collected plenty of turkeys along the way. I always thought pursuing slams of any species was a little frivolous, but I’ve come to realize that it’s not the animals that matter, it’s the experiences. And the company.

2009 Wyoming Merriams
Snow clung to the high ridges around Devils Tower, and turkeys were still in their winter flocks when we hunted around the town of Hulett, in Wyoming’s northeastern corner. In classic early-season form, gobblers responded to calls but invariably were led away by nervous, possessive hens. Fanning worked, using the tail feathers of a recently killed gobbler to mimic the display of a strutting tom. I pulled two gobblers away from hens by fanning just over sharp ridges, then jumping up and shooting the incoming toms. But what I really recall from this hunt was how I nearly poisoned the crew.

Postcard
Wild coneflowers grow everywhere on grassy slopes of the Black Hills here, and I had heard for years that the root of this plant, called echinacea, has medicinal qualities. I tugged up a particularly handsome root, cleaned it off, and chewed it for much of the afternoon, as I cast around for a flock of turkeys to work. I felt a mild euphoria and a bit of numbing of my tongue, and that night at dinner I heartily recommended that my companions dig up and chew their own roots the following day. The next night my partners reported their own findings: crippling diarrhea.

2010 Hawaii Rio Grandes
Turkeys from Texas were released on ranches on the Big Island of Hawaii back in the 1960s, and now Rios occupy most mid-elevation habitat. There was something surreal–and deeply satisfying–about hearing gobbles a thousand feet above the pounding surf of the Pacific.

I hunted with legendary turkey guide Jon Sabati, who is as laid-back as you’d expect a tropical-island turkey dude to be. We hunted the steep slopes of active volcanoes, using binoculars to spot gobblers moving uphill, then got in their way and ambushed them as they strutted up lava chutes.

Postcard
One evening our group was invited to attend a National Wild Turkey Federation banquet, where we were seated as guests of honor. As we watched with fascinated horror, the banquet opened with a traditional Hawaiian chant and dance that, if I understood it correctly, called for “imperialist Americans” to be forcibly removed from the island. It was hard to swallow the delicious poi, taro pudding, and luau pork while simultaneously looking over my shoulder and trying to avoid eye contact with Ray, who was cackling with nervous laughter.

2012 Yucatan Ocellateds
I once suspected that these jungle birds are not true turkeys, but that they occupy an evolutionary link between guinea fowl of South America and our North American wild turkey. Ocellated birds have iridescent eye-shaped marks on their tail feathers, just like peafowl do, and they don’t have beards. They also don’t gobble the same way that northern birds do. Then I hunted them. The mating drum of toms was gobbling, only in a foreign language.

A generation ago, pioneering ocellated-turkey hunters probed deep in the jungle, located roost sites, and shot birds off the limb. They assumed these turkeys wouldn’t respond to a call, and besides, the jungle foliage was so dense that seeing a moving turkey before it spotted you was nearly impossible. But in recent years, much of the Yucatan’s forest has been cleared for production agriculture, and research has revealed that ocellated turkeys vocalize much as their northern cousins do. We put both dynamics to work, calling birds out of the jungle and to the edges of newly cleared soybean and sorghum fields, where we could assess the long-spurred gobblers and make clear shots.

My euphoria at killing my first ocellated was dampened by Gordy’s experience: He missed a tom–twice. The Yucatan is a long way to go to come home without a turkey.

Postcard
On our drive back to the airport in the Gulf city of Merida, we visited one of several Mayan ruins. There, carved in the porous limestone alongside depictions of leopards, ocelots, and human sacrifice, were carvings of wart-headed turkeys–​­evidence that our little family of hunters is part of a much longer lineage.

2013 Florida Osceolas
This is the last bird I require to achieve my grand slam, and it looked like I’d be celebrating that milestone with this crew. Unfortunately, I spent three days in a ground blind and never had a play on birds inside shotgun range.

Postcard
We started this hunt like any family visiting South Florida would, by spending a day at Disney World. There, Uncle Ray bought me a pouch for my favorite slate calls and striker, a red-and-black zippered purse with the distinctive ears and smile of Minnie Mouse. I plan to take it back to Florida this spring to finish my slam. But as satisfying as I expect that achievement to be, something will be missing: The rest of my crew already has their Osceolas, so for the first time in years, I’ll be hunting without reuniting with my occasional family. That’s okay. I’ve already suggested to Aunt Linda that we turn our next slam focus to wild sheep.