Although I’ve never had the pleasure of hunting with them, Harold Knight and David Hale have always been two of... 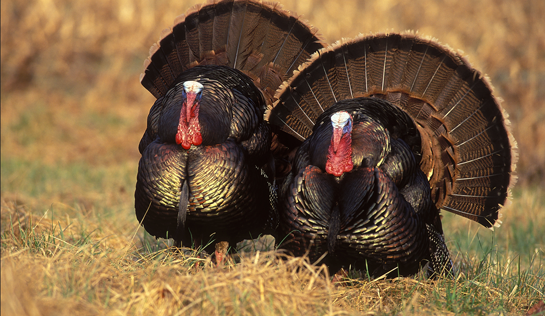 Although I’ve never had the pleasure of hunting with them, Harold Knight and David Hale have always been two of my favorite turkey-hunting personalities. Incredibly knowledgeable, kind and gentlemanly, Harold and David taught an entire generation of sportsmen how to hunt spring gobblers.

Despite my wholehearted respect for the dynamic duo, I was admittedly skeptical when Harold and David first introduced the “Fighting Purr” calling system back in the early ’90s. Even though I’d read (and edited) innumerable success stories about the double-pushbutton, gobbler fighting call, personal hands-on accomplishment escaped me. It wasn’t long before I banished the fighting purr from my repertoire … until last Saturday.

It had been a relatively rough week of turkey hunting at my New England camp. Terrible weather and a lower than expected gobbler population, left us scratching and clawing for every bird we were fortunate enough to shoot. By Friday, we’d taken 6 gobblers with 2 misses (myself included).

Outdoor Life online editor Alex Robinson was my hunting partner on Saturday morning and by 5:10 a.m. we were set up on a group of birds we’d roosted the night before. Due to the decided lack of birds–and the anticipated weekend hunting pressure–the plan was to practice patience on these turkeys and just let the hunt go where it took us.

Soon, the incessant roost gobbling began to sort itself out. We were on two, maybe three, adult gobblers and a pack of jakes. As they often do in the roost, the toms were gobbling at each other and it wasn’t until my third series of soft calls that I felt satisfied that the group was gobbling at me. I’d wait until they flew down before calling again. And so they did. And so I did. But then … Nothing. Not a gobble or a yelp or a cluck.

It was an hour after flydown by the time we heard our first sign of some sort of turkey life. It was little more than a courtesy gobble, but its location spoke volumes. The birds–likely with hens–hadn’t moved more than 50 yards from their original roost trees. I picked and I poked at them with the hope that eventually they would break, but nothing worked. Eventually we saw the strutters at 80 or so yards–back and forth, back and forth never moving more than a few feet in our direction. This went on for more than 45 minutes.

I searched my vest for a gobble tube–my last resort call–but had forgotten it back at camp. I did, however, have a second Quaker Boy EZ Yelper push-button call. It was time to get crazy. Fighting purrs it would be.

With a push-button call in each hand, I let it rip. And the gobblers reacted instantly. Suddenly, mere courtesy gobbles took on a different, more excited tone and the side-by-side strutters moved up the hill toward us. When they seemed to hang up at 50 yards, I scratched in the leaves. They started toward us again. At 40, I hoped for Alex to shoot knowing full well that the toms would decipher my ruse in the next few steps. At 30 he shot, rolling the lead bird backward while the second strutter flew into a nearby pine. Woefully, it quickly regained its senses–and footing–and flushed off of our hillside.

At first we sat. Then we looked for sign. Then we cussed. And finally I laughed to myself. Seems Harold and David are a long way from having taught their last turkey-hunting pupil.