Can Big Solar Flares Cause Big Trouble on Earth?

On Sunday, February 13th – a very large solar flare erupted from the surface of the sun. This was one... 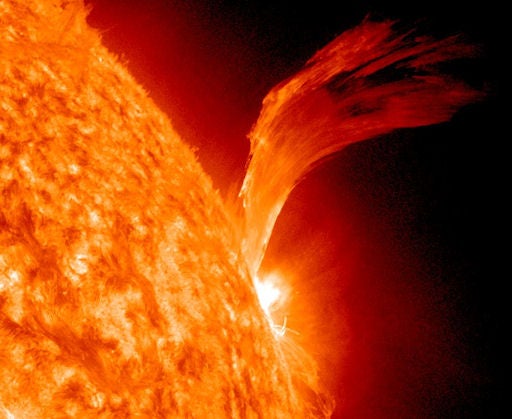 On Sunday, February 13th – a very large solar flare erupted from the surface of the sun. This was one of the biggest solar flares to occur in the past four years. This flare was “geoeffective”, which means that the flare was pointed straight at us. The Earth was literally in the crosshairs of this shot. And this event was just two weeks after a rare double-eruption on January 28th, in which a solar flare shot from each side of the sun at the same time. Many scientists agree that we are entering a period of significant solar activity. But why should space weather matter to us?

Well, for starters, let’s look at the three classes of solar eruptions. Class “C” flares, which are the weakest, really don’t do anything. Think of these as a hiccup from the sun. Class “M” flares, which are moderate, give us more radiation and particles than a “C”. Class “M”s are responsible for the Northern Lights travelling outside their normal territories. No problem. But then there are Class “X” flares. These are strong enough to cause disruptions in satellites and communication systems here on Earth. That last one is the one to really think about. What happens to our very mobile and information dependent way of life if our communications get knocked out? How would you communicate to make sure your friends and loved ones are OK? It certainly gives you some food for thought. And what about the stories you may have heard about solar flares knocking out computer systems? Isn’t our money all tied up in computers now? Maybe space weather matters more to us now than ever before. So what would you do if a flare took out your phone?