A magnitude 8.9 earthquake off the shore of Japan unleashed a 30-foot-tall tsunami Friday, March 11, 2011. For hours afterward... 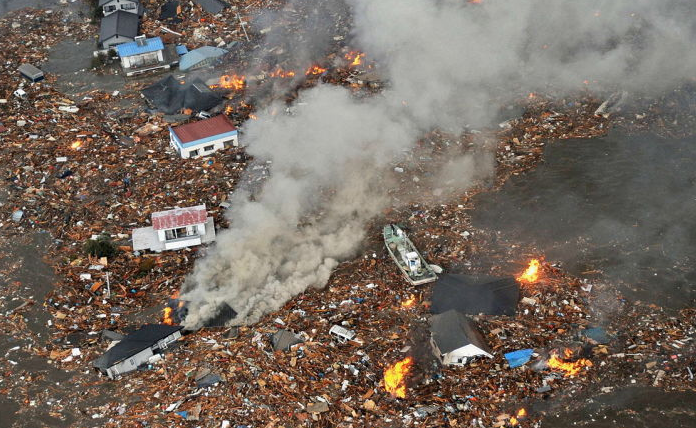 A magnitude 8.9 earthquake off the shore of Japan unleashed a 30-foot-tall tsunami Friday, March 11, 2011. For hours afterward more than 50 aftershocks, the strongest measuring 7.1 and many over 6.0, rocked the nation. This was one of the largest earthquakes ever recorded on Japan’s eastern coast.

So far, it’s estimated that at least 6,000 people have been killed or are missing. The huge wave swept away boats, cars and homes that were already damaged by the quake.

A tsunami watch was posted for the entire Pacific, as far away as South America, Canada, Alaska and the U.S. West Coast.

The wave and water damage also had an unexpected accompaniment–numerous and widespread fires burned out of control, one of which sprang up at a Japanese nuclear power plant. Firefighting crews were helpless, as they could not travel through the water and wreckage to put out the fires.

This story clearly illustrates just how vulnerable the modern infrastructure really is. Put yourself into the same scenario. An earthquake has just leveled your house. Fires begin burning in your neighbor’s homes as gas lines break and electrical sparks fly. Then you see the 30-foot-tall wave coming at you–far faster than you can run.

How does one survive such a complex emergency? The grim reality is that not everyone survives. All you can do in a scenario like this is run to higher ground at the first sign of the quake, especially in tsunami-prone areas.

For those who scoff at the need for 72-hour kits and bug-out bags, they might want to take another look at the value of these preparations in the context of this sad and complicated emergency.

UPDATE: As Japan continues its rescue efforts following the off-shore earthquake and 30-foot-tall tsunami of March 11, a second earthquake has struck–this time inland near the mountains of central Japan.

In the early morning hours of March 12, a magnitude 6.6 earthquake struck the central, mountainous part of the country, which is located far away from the Friday quake’s epicenter. No one can say at this point whether the two events are related.

The magnitude 8.9 earthquake off the shore of Japan and resultant tsunami have claimed more than 1,000 lives, and left many more injured and homeless. Friday’s quake was nearly 8,000 times stronger than one that devastated Christchurch, New Zealand, last month. With nighttime temperatures around freezing, thousands in Japan are suffering with nowhere to go, and nothing to go home to.