In a previous post we talked about MRSA. It’s a nasty, antibiotic-resistant bacterium that you never, ever want to catch.... 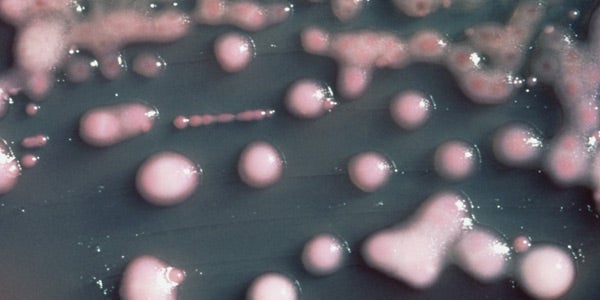 Photo by Centers for Disease Control and Prevention.
SHARE

In a previous post we talked about MRSA. It’s a nasty, antibiotic-resistant bacterium that you never, ever want to catch. Why? Because we are collectively scraping the bottom of the barrel to find medicines that will treat it.

Many experts agree that outbreaks of bugs like this could send our mortality rates for illness and injury back to the rates before penicillin, or possibly medieval times. And guess what, MRSA is not the only critter on the radar anymore.

New Bug #1
In August of 2010, a “Super Bug” strain called NDM-1 (New Delhi metallo-beta-lactamase-1) was discovered in the UK, with links back to India. This bug was actually found in the drinking water supply of New Delhi, India, in April of 2011. I guess folks there will be washing down their tandoori chicken with beer from now on.

And New Bug #2
The other “Super Bug” on today’s cringe list is a bacterium called carbapenem-resistant Klebsiella pneumoniae, or CRKP.
CRKP has now been reported in 36 US states, and health officials suspect that it might also be triggering infections in the other 14 states where reporting isn’t required. I don’t know about you, but the most alarming thing to me about that last sentence is that 14 of our United States are not required to report outbreaks of deadly bacteria. Does anybody else see a problem with that?
In earlier outbreaks, 35 percent of CRKP-infected patients died, according to the Journal of the American Medical Association in 2008.

What To Watch For
Whether you have been in the hospital or not, if a wound seems infected or inflamed you should always watch out for fever; a yellow/white or greenish drainage that may have a foul odor; and atender red/dark pink area on the surface of the skin that is growing in size.

Then Go Kiss A Frog
There is a silver lining to the gloomy cloud of medicine-tolerant deadly bacteria. The threat is driving scientists to look for new antibiotics harder than ever. I recently read a story about frog skin being sourced for whole new classes of antibiotics, which are testing well against resistant bacteria. So maybe there is something to kissing a frog…