Are You Prepared For the Next Solar Flare? 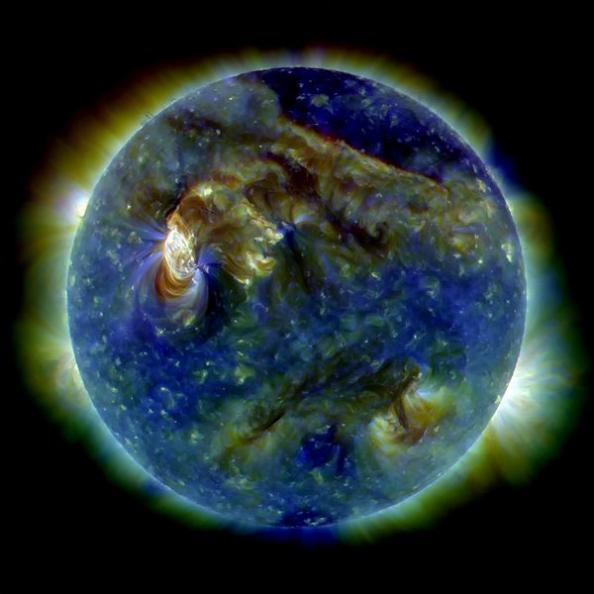 The sun coughed up a significant and fiery blast last week. The Class “M” solar flare erupted Tuesday, June 7, and NASA says it will give our planet just a “glancing blow.” The National Weather Service is expecting only minor disruptions to satellites and power grids.

NASA officials say that big flares like this are likely to be common during the next few years, with solar activity expected to peak around 2013. Most solar flares will only cause minor problems, but there’s always a chance that a huge Class “X” flare could hit us.

The largest flare on record to hit Earth occurred in 1859. It created auroras worldwide and interrupted telegraph service for weeks. Considering today’s technology-dependent societies, a major solar storm could plunge the modern world into some serious trouble.

What Exactly Are You Preparing For?
Is there any way to prepare yourself and your loved ones for the effects of a major solar flare? Sure, and the first part is to understand what a solar flare can do.

There are many types of energy and particles that make up a solar flare. There are x-rays and other types of energy that are relatively harmless, once filtered out by Earth’s magnetosphere and atmosphere. But there are also high-energy particles associated with flares, which can achieve energies in the order of hundreds of millions of electron volts. This is enough power to fry communication satellites outside the protective fields and overload our electrical grids on the Earth’s surface, shutting them down for an unpredictable length of time.

For most of us, the roasting of some satellites could mean no GPS, no satellite TV, no radio and disrupted communications for anything that relies on satellites as part of its network.

But the power grid shutting down is even more serious. There are literally millions of miles of high-voltage power lines in the world, with millions of miles of supply lines going to homes and outlying areas. Think of these as a large antenna system which could pick up the energy being transmitted to it. If the electrical grid goes down, all modern activities will come to a halt, just so you know.

Now that we’ve identified the problem, our next task in preparedness is to have various plans to take care of you and yours in the event that both power and communications go down. The good news (if you can call it that) is that a flare shouldn’t catch us by total surprise. There would be time for a warning and a gap between actually getting hit and the loss of all communications. Earth’s atmosphere and magnetic field would shield the surface from the direct energy of a solar flare, and terrestrial communication such as cell-phone networks (2G, 3G and 4G), TV and radio broadcasting and Wi-Fi are not as sensitive to solar energy and may keep running for a while. But the bad news is that if the power grid goes down for an extended period, the back-up systems for the wireless networks and cell-phone towers would, at some point, go down too.

And How Exactly Do You Prepare For That?

Make communication plans, with back-ups in place
• Plan a time and place to meet your friends and family if communications go out.
• Have a back-up time to assemble there.
• Have a second site to assemble, if you cannot make it to–or use–the first site.
• Plan a place to leave notes for friends and family.
• Have some idea of the location of everyone important to you, at all times.

Make your home less reliant on electricity
• Don’t store so much food in the freezer. If the power goes, you can only eat so much ice cream in one sitting.
• Have a way to charge your cell phone besides the wall outlet. Solar chargers are nice, but AA battery cell phone chargers are cheaper and more commonly available.
• Have different ways to cook and provide light in your home without the need for electricity.
• As always, have a Go-Bag packed and ready.