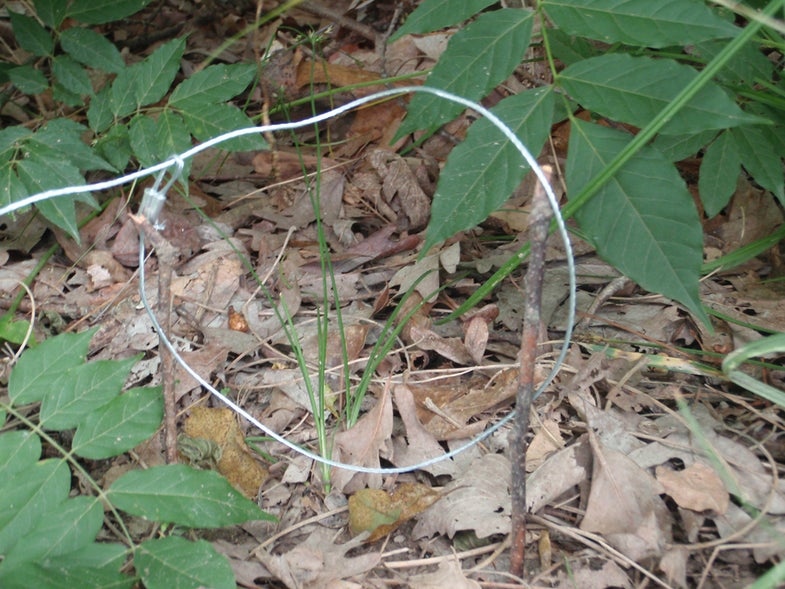 The Finished Trap
Here's our little hunter, ready to do its work, while we are off somewhere else doing other tasks.
SHARE

In my blog post on Survival Fishing, it might have seemed like I was throwing the art of trapping under the bus by suggesting that fishing is the best way to acquire protein in a survival situation.

Trapping is a great activity to do in tandem with fishing, or to replace fishing in arid regions with little water.

Yes, fishing is easier than trapping, especially for beginners. But skillfully setting several snares can be like deploying a small army of hunters. Here’s how to do it.
**
Setting Traps**
There are many different types of traps. Low-tech traps, like natural fiber snares and rock deadfalls, abound in survival lore. Modern trappers can enjoy greater success with cable snares, leg hold traps, body grip traps and cage traps. But for our purposes today, let’s concentrate on simple snares.

Primitive snares can be entirely built and set with materials gathered on site. You can even weave your own cordage out of bark fibers. That’s the good news. The bad news is that there are a lot more things that can go wrong with natural material traps, and there are some steep learning curves in primitive trapping, like when an opossum chews through your nice hand-woven bark cord.

If you’ve never trapped before, or haven’t had much luck, here are some points to consider.
– You need to have specific animals in mind when you trap. Don’t just set a trap wherever for whatever.

– Scavengers like raccoons, opossum and skunks have a hard time resisting the fine flavor of bologna, hot dogs and sandwich-grade ham. Use the right bait to catch the right beast.

– Trapping is a numbers game. Set out a dozen traps and beat the odds of failure.

– De-scent everything, even your hands prior to making trap parts.

– Make sure that the trap is strong enough for the biggest animal you might catch.

– If you’re setting a fixed snare, make sure the animal can’t tear it loose from its point of attachment, and you really should have a swivel in the line so the rolling and flopping animal can’t kink and break the line.

– If your snare goes to a spring pole, or some other “engine” to get the animal up in the air, make sure it has enough lifting power to get the fattest of that species off the ground. And while you’re at it, set the trap to lift the animal high enough to be out of the reach of scavengers like coyotes. Make sure the animal will hang at least five feet off the ground.

– If you’re trapping out of season, in an emergency, be aware that the animals may have a lot more fleas, parasites, ticks and other tiny pests than they would have in the normal, colder trapping season.

– Obey your local trapping laws, unless it’s a life-or-death emergency.

Click here to see how I made snare traps during my last training session.