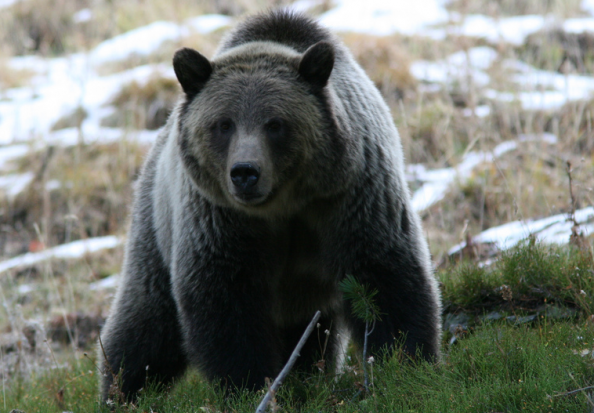 A female grizzly mauled and killed a hiker in Yellowstone National Park yesterday, marking the first fatal grizzly bear attack within the park’s boundaries in 25 years.

A couple was hiking on the popular Wapiti Lake trail when they seemingly startled a mother bear, park officials said in a statement. The sow apparently perceived them as a threat to her cubs and attacked the male hiker.

Some nearby hikers heard the woman’s cries, and used their cellphone to call for help. Unfortunately, the man’s injuries were severe and he died at the scene. The man’s wife was unharmed. The couple’s names have not been released yet, as authorities are still trying to contact the family.

An investigation into the attack is underway, and if the park investigators conclude that the sow behaved normally, in defense of her cubs, she will not be put down.

The last fatal grizzly attack inside Yellowstone was in October 1986, when the mauled body of a man was found by the roadside near Otter Creek. Park officials concluded that he was attacked while photographing a grizzly, as a camera and tripod were set up at the scene of the attack.

There was a grizzly attack last summer at a campsite just outside the park boundaries that left one camper dead and two others wounded.

How to Stay Safe In Bear Country?
There are many ways to stay off the bear’s radar, like keeping food outside your camp and at least 100 yards downwind. Use a bear bag for your food, toothpaste and other odorous camp items by hanging them up in a tree. You should also limit the odorous products you wear while you’re outdoors (cologne, perfume, lotion, etc.).

Always make some noise while you are hiking. Most animals will leave an area when they hear humans approaching. Don’t hike solo either. A group makes more noise, and creates a more formidable deterrent to bear attacks. Also, always carry bear spray or a gun (or both) when you’re in grizzly country.