Hurricane Irene is on Her Way

Photo courtesy of Nasa Much of the Eastern seaboard, still rattled from the unexpected and rare earthquake on Tuesday, is... 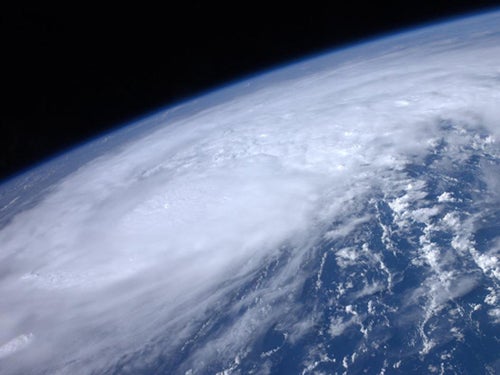 Much of the Eastern seaboard, still rattled from the unexpected and rare earthquake on Tuesday, is now bracing for the impact of another force of nature–Hurricane Irene. Many eastern Governors have declared States of Emergency due to the imminent Category 3 Hurricane, which is expected to make landfall in North Carolina on Friday night.

Hurricane Irene is predicted to first hit the coast around Cape Hatteras, North Carolina, on Friday night and slam into the rest of the mid-Atlantic region by Saturday night and early Sunday morning. Evacuations have been ordered in many mid-Atlantic coastal areas and barrier islands like North Carolina’s Outer Banks. Some areas are expecting severe coastal flooding from waves up to 15 feet tall (expected path of Irene).

Irene is predicted to weaken some as it travels up the coast, but this Category 3 storm is still expected to deliver winds of 50 to 70 mph when it reaches New York City on Saturday. This will be the first hurricane to hit New York since September 6, 2008, when Hurricane Hanna struck Long Island with winds up to 52 mph.

“For the general public, it’s a good idea to move Friday,” Bloomberg said. “Keep in mind, it is possible–I don’t know that I want to say likely–but it is very conceivable…that Saturday morning at 8 o’clock, we’re going to say, ‘Look, the forecast has not changed. The storm is still barreling down on us. It’s still very dangerous. You must get out of these areas.'”

The storm is expected to hit Boston on Sunday. Flooding is expected from the 6 to 12 inches of rain predicted for the New Jersey shore, Long Island, Massachusetts and Connecticut.

Getting ready for a hurricane can be a little intimidating, but it accomplishes two vital things. First, preparing for trouble removes some of the helplessness that many people feel when an emergency is imminent, and preparing puts you in the right mindset to be a survivor, not a victim. Secondly, preparing for a storm forces you to gather the supplies and make the plans that can help you adapt to the changing environment of a disaster. This can even give you the security and the resources to help others, as you put the pieces back together after a storm.

As you prepare for a hurricane, consider that you may lose power, which obviously takes away many of our modern conveniences. Make sure you have plenty of easy-to-fix, no-cook foods on hand and ample sources of lighting. Lean toward battery operated lights instead of candles to reduce the hazard of fire during and after the storm. Also, make sure you know the routes to evacuate inland, away from the hurricane’s path.

• Know where your gas, water and electrical shut-offs are located.

• Gather at least a 72-hour supply of water and food for each person in your home, plus flash lights, first aid supplies and hygiene items. Have something to pass the time for each person with you (books, board games, coloring books for the kids, and other items that don’t require electricity).

• Fully charge your cell phone and other electronics before the power goes out, and have a back-up power source on hand, like a car charger or an external battery pack like the Energizer XP1000 http://www.energizerpowerpacks.com/us/products/xp1000/

• Have a battery-powered radio so you can stay alert to evacuation notices, disaster news and instructions.

When the evacuation notice is given, the things you do next depend on whether you have to leave in a few hours or at that moment.

• If you only have minutes to get out, don’t waste time gathering possessions. Most things can be replaced, lives cannot.

• If you have more time, stay very alert to storm and flood watches and warnings for your local area, and the areas upriver from your location.

• Drinking water contamination can be a serious issue during and after a flood, so make sure you have safe water with you as you evacuate.

• If you have a day to prepare, move important things to the highest and driest location you have. Bring important and irreplaceable papers, photos, files and data with you as you leave.

• As you evacuate, take plenty of cash, no-cook foods, spare clothes, hygiene items, your cell phone charger, rain gear and lots of bug-out-type supplies in case you have to provide for yourself after your exodus.

• Don’t try to ride it out. If you are instructed to evacuate, DO SO!

Hurricane Survival Guide Our comprehensive guide will teach you how to stay safe when a hurricane hits.

31 Items to Keep in Your Urban First Aid Kit: Sometimes the disaster doesn’t kill you, but the aftermath could. And on that theme, here is a quick mayhem checklist for you to consider.

How to Prepare for Disasters

Flood Survival Tips: Be ready for everything that Irene’s got, review these tips and make sure you know the do’s and dont’s of flood survival.

8 Weather Warnings: If you’re caught on the water without a barometer, look for nature’s clues to approaching weather.

The Bug Out Bag: What if you had only three minutes to grab whatever you could take from your home, and the rest of your belongings would be lost forever?

[Survival Wish List](http://survival.outdoorlife.com/articles/survival/2007/09/survivalist-wish-list/ ads www.badlandspacks.com/2011ad1.html): A roundup of the best and most innovative survival gear ever introduced.