Logger Cuts Off Toes to Survive

A Colorado logger used his three-inch pocketknife to amputate the toes on his right foot when it became trapped under... 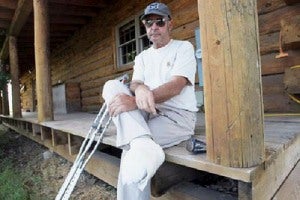 A Colorado logger used his three-inch pocketknife to amputate the toes on his right foot when it became trapped under his six-ton trailer deep in the western Colorado wilderness on August 19.

John Hutt, 61, of Montrose, was in the process of gathering firewood in a remote area west of Telluride when his trailer slipped, pinning his foot.

Hutt’s story brings to mind the incredible survival tale of Aron Ralston, who sawed off his own arm after it became stuck between a canyon wall and a boulder in southern Utah in 2003. Ralston’s endeavor famously lasted 127 hours (and was the name of the movie based on his ordeal). Hutt, on the other hand, waited all of 30 minutes before arriving at the decision to take steel to flesh.

Granted, Hutt’s cell phone was unreachable in the cab of his truck, and besides he was out of cell phone range. And, I’m not going to pretend to understand what kind of pain Hutt must have been experiencing. But I feel like if I were to find myself in a similar situation I probably would have waited longer than the duration of a TV sitcom timeslot before I started removing my toes with a pocketknife.

Hutt says that he made the decision after realizing that no one could hear his calls for help. Before he left for the woods, Hutt told his wife that he would return in several hours from the job 50 miles from their home, but he didn’t know when she might start looking for him.

What do you all think? Did Hutt act too hastily? Or would you have made a similar decision?