Survival Foods: Make Your Own Jerky

I fully understand that the following information violates everything you have ever heard about food handling safety, but if you... 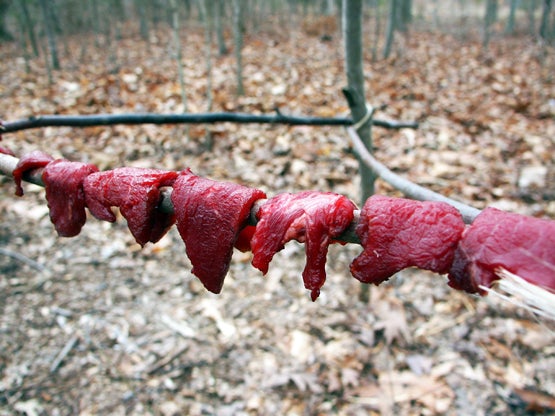 I fully understand that the following information violates everything you have ever heard about food handling safety, but if you want to make your own jerky like our ancestors did (read: outdoors), this is how you do it.

Step 1: Get some fresh meat. It has to be raw! Meat that is cooked and then dried out will go bad in a few days, depending on the temperature, and lead to food poisoning. Red meat and most fish do very well for jerky making; although any mammal, bird, fish or larger reptile meat will work with this technique. Salt, sugar and spices are optional, but are very helpful if you have them.

Step 2: Cut the meat thin and across the grain. Slice your pieces less than ¼-inch thick and cut perpendicular to the grain of the meat. (The grain is direction of the long bundles of muscle fibers and appears as stripes or lines in the meat.) Cut across these lines, not in the same direction, or the jerky will be tougher than it needs to be. Cut off all visible fat. The fat will go rancid in the dried meat. Fat must be preserved by rendering, which is a whole different process.

While the meat is still juicy, sprinkle on a little salt, sugar and /or spices like pepper, ginger, cumin, chili powder, etc. These additives are optional, but using salt will create a less hospitable environment for bacteria. After all, the whole point of jerky is to make the meat less hospitable to bacteria by removing the moisture, which the bacteria need to live.

Step 3: Dry it out. Hang your jerky slices on an improvised rack or simply hang it on twigs and branches around camp. Don’t leave it in camp unattended, or birds and other jerky thieves will get it. Jerky can be dried near a small smoky fire to add smoke flavoring and keep flies away while the meat dries. Don’t dry the jerky over the fire. It will cook, and begin to go bad in days.

Depending on the humidity, the jerky may dry in one day or several days. (Don’t leave it out overnight; it will get damp and the critters will get it. Stash it somewhere dry.) Flip it a few times during the drying process. When it becomes slightly brittle, it is done. Red-meat jerky should finish drying with a purple-brown color. White-meat jerky should dry to some shade of pinkish grey. The stuff you buy is dark brown thanks to food dye, not because of cooking. The store bought stuff is dried raw meat also, it’s just packed with so much salt and preservatives that it didn’t need to be as fresh or that cleanly trimmed of fat as your own meat.

Step 4: Store it somewhere dry and safe from pests. If you are staying outside, your options are limited. Just keep it as dry as possible, and keep it in a breathable container like a cloth or paper sack. In glass, metal or plastic the jerky will sweat and go bad more quickly. Check it every few days for mold, worms or other visible life forms. Of course there will be bacteria on your jerky, which leads us to the next step: Safe consumption of dried raw meat.

Step 5: It’s time to eat the jerky. Your jerky should last several weeks in humid conditions, and several months in the desert. But since we are dealing with dried raw meat that has been sitting around for some time, food safety should be a strong concern. I always cook the finished jerky before I eat it to make it as safe as possible. This usually involves toasting it over the fire or grinding it up with a rock and throwing it in a soup or stew. It will never turn back into the tiny, tender steaks it used to be, but at least it won’t be as chewy as that store-bought stuff, and the best part is that you made it yourself.

Got a favorite meat to turn into jerky? Let us know in the comments.