Two Typhoons Sweep Through The Philippines 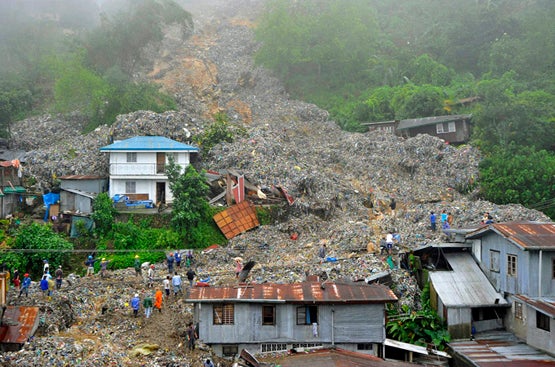 The emergency worsened as the second typhoon, Nalgae, arrived less than 5 days after the first typhoon devastated the same area. This one-two punch led to a “State of Calamity” being declared by the local authorities. Five towns in Cagayan were still flooded when they were hit by Nalgae, which was a much stronger storm than the first one. The Rescue workers scrambled through debris and floodwaters on October 2, so that they could deliver food, water and other relief materials to hundreds of villagers who had been stuck on rooftops for several days.

Seven towns north of Manila continued to be under waist-high water after more rain was brought by the second storm. Nalgae has been the 17th tropical cyclone to affect the Philippines in 2011.

On October 3, helicopters were able to deliver food via air, but could not rescue any of the people who were stuck on their own rooftops for 4 days. One of the strangest problems with the evacuations was the fact that most of the victims refused to leave their flooded homes and towns.

Although floodwaters have begun to subside, thousands of families continue to stay in the evacuation centers as more than 43,000 houses were damaged by the typhoon Nesat alone. Like other forms of severe weather, a large typhoon can hit an entire region with multiple forms of damage. From flooding to wind damage, and from utility outages to supply shortages, the initial storm and the aftermath can both be deadly.
**
The 5 Worst Dangers from a Typhoon**

If you have an existing medical condition, suffer a sudden medical crisis (like a heart attack) or require first aid from injuries sustained during or after the storm – you may not be able to get to the medical care you need.

With flooding, comes contaminated water. It may be very difficult to get safe, clean drinking water during and after typhoons and similar flooding events. You could find caches of fresh rain water here and there in high spots, but you’d be just as lucky to find some bottled water.

In murky waters, it is impossible to see the broken glass, tangled wire and jagged pieces of wood that account for much of the wreckage of a storm. If that wasn’t bad enough, add the flooded waste water of the town to your cuts and punctures to create a recipe for infection.

If the wind didn’t bring the house down, the flood waters might. Many people lose their lives in hurricanes and typhoons due to their homes crashing in on top of them during the storm or after it. Very useful items can be scavenged from a flooded home, like canned food which would still be good to eat, but risking the flood waters may not justify the rewards.

The strong currents of flood water can sweep people away quickly, and present a very real drowning hazard to the survivors of a typhoon.

Our deepest wishes for swift relief and full recovery go to the people of the Philippines.

If you’d like to donate to the disaster relief to help the thousands of children hurt and displaced by this disaster, Save The Children has set up a special Emergency Relief Effort at www.savethechildren.org.