Few things demonstrate the average Coast Guardsmen’s drive to help others and save lives like the recent off-duty actions of... 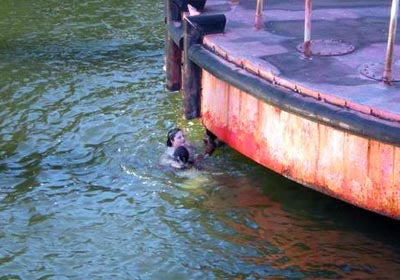 Few things demonstrate the average Coast Guardsmen’s drive to help others and save lives like the recent off-duty actions of Petty Officer 2nd Class Leon Doniphan, as he leapt into the Columbia River to save a young girl from drowning.

Doniphan is a food service specialist aboard Coast Guard Cutter Alert, which is home ported in Astoria, Oregon. On the evening of Sept. 10, Doniphan had finished his work on the cutter and was on his way home when he came upon a troubling scene.

“I noticed a group of individuals on the shore fixated on the river’s edge,” says Doniphan.

A young girl, about 11 or 12 years old, was swimming in the river near a large navigation buoy, 40 feet in diameter and chained to the river’s shore. The girl had tried unsuccessfully to swim against the current and was panicking. Nearly swept under the buoy, she managed to grab a hold of small piece of metal on the structure’s edge, which was the only available handhold.

Washington resident Lewis Nevel witnessed the entire event. “She was struggling against the current, fighting to keep her head and shoulders above the water. She was yelling that she couldn’t hold on,” explains Nevel.

When Doniphan reached the group of onlookers, he read the situation and quickly took action.

“The young sailor wasted no time,” Nevel says of Doniphan. “He dropped his backpack, pulled off his sweatshirt and called to the girl, ‘Hold on, keep your head up!’ He called out to another nearby sailor to go get a life preserver. He quickly skirted down some very slippery rocks on the jetty. It looked at one point that he slipped and fell against one of the rocks before entering the water. He kept talking to the girl, ‘You’ll be okay, hold on!’ Doniphan jumped into the water and swam 40 feet through the strong current to reach the girl. He was able to grab hold of the same small piece of metal that the girl clung to.

“The current was very strong and was trying to pull me under the buoy also,” said Doniphan. “I had to exert a great deal of effort to keep myself right and face to face with the girl in the water. The water was very cold and I had jumped in wearing sweat pants which caused drag. I told her that I was going to get her off the buoy, but I told her first that she couldn’t panic. I explained to her how if she panicked she could drown us both. As I calmed her I told her to trust me and to get onto my back.”

“I kicked as hard as humanly possible to get us away from that buoy,” says Doniphan. “Once we were away from the buoy I realized we were still being swept downriver. I managed to swim just far enough to be able to grab a hold of the chain that helps secure the buoy to shore. With the girl still on my back I was able to pull us, hand-over-hand, back to the rocks on shore.”

Doniphan has remained modest, despite his recognition as a local hero. “I have courage, but I don’t feel like a hero. I’m a regular guy, a cook. I was in the right place at the right time. I could never stand by and watch someone die if I thought there was something I could do.

“Besides,” he jokes, “I wasn’t about to let someone drown next to a Coast Guard Cutter! The media would have a field day with that!”