One West Virginia family had a bittersweet Mother’s Day weekend, and are considering themselves very fortunate that their mother is... 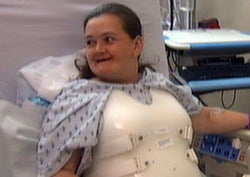 One West Virginia family had a bittersweet Mother’s Day weekend, and are considering themselves very fortunate that their mother is still alive. This remarkable story of inner strength comes out of Morgantown, West VA, where 41-year-old Veronica McFoy freed herself after being trapped in her wrecked van for nearly three days.

On Thursday afternoon, after receiving reports of a woman trying to flag down vehicles on Fairmont Road, the Monongalia County Sherriff’s department found the mother of two, who had been missing for three days.

Sheriff Al Kisner told the media that McFoy lost control of her van on Monday, and the van went over an embankment into a brushy area that wasn’t visible from the road.

Suffering from broken vertebrae, ribs and a chest bone, this tough matriarch caught rain water in an empty bottle, and made a decision on day three to summon her remaining strength to break out of the family van. Around the tenth attempt, she broke a window and was able to crawl free of the vehicle to get to the road.

Mrs. McFoy is recovering now and happy to be reunited with her family. A spokesperson for Ruby Memorial Hospital says Veronica McFoy was in fair condition on Friday and lucky to be alive.

Mrs. McFoy told reporters, “I didn’t know how much strength I had. I never thought of myself as a very strong person, but apparently I am a lot stronger than I thought I was.”

Check out her video interview here.