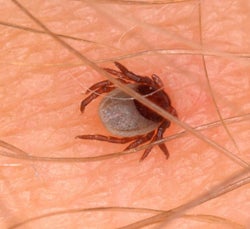 One very unfortunate reality of enjoying the great outdoors this time of year is that we are exposed to a number of tick-borne illnesses. If you haven’t had Lyme Disease, you probably know someone who has. This ailment has become all too common, and it seems to be spreading by the day. And Lyme is not the only thing that you can catch from a tick. Other diseases are not as well known or as easily diagnosed. Here’s a look at five of them.

Anaplasmosis is a bacterial infection transmitted to humans primarily from the black-legged tick (Ixodes scapularis) in the Northeast and upper Midwest, and the western blacklegged tick (Ixodes pacificus) along the Pacific coast. Symptoms include fever, headache, chills, and muscle aches, which usually occur within 1 to 2 weeks of the bite. Anaplasmosis is treatable with antibiotics.

Babesiosis is caused by microscopic parasites that infect red blood cells. Most human cases of babesiosis in the United States are caused by Babesia microti, which is transmitted by the blacklegged tick. This illness is found primarily in the Northeast and upper Midwest and comes from microscopic parasites that infect red blood cells. Many people who are infected with Babesiosis do not have any symptoms. For those who do get diagnosed, effective treatment is available.

Ehrlichiosis is caused by one of several different bacterium which are transmitted to humans by the Lone Star Tick (Ambylomma americanum), found primarily in the south-central and eastern U.S. Typical symptoms include fever, headache, fatigue and muscle aches over the first few weeks following an infected tick bite. Ehrlichiosis is treatable with antibiotics.

Rocky Mountain Spotted Fever (RMSF) is a bacterial disease transmitted by the American Dog Tick (Dermacentor variabilis), Rocky Mountain Wood Tick (Dermacentor andersoni), and the Brown Dog Tick (Rhipicephalus sangunineus) in the U.S. The Brown Dog Tick and other tick species are associated with RMSF in Central and South America. Symptoms of RMSF can include fever, headache, abdominal pain, vomiting and muscle pain. A rash may also develop, but is often absent in the first few days. Some patients, however, never develop the rash. RMSF can be very serious, even fatal, if not treated with antibiotics in the first few days of symptoms.

STARI is transmitted via bites from the Lone Star Tick. The rash of STARI is a red, expanding “bull’s-eye” lesion that develops around the site of a bite, and the rash is often confused with the bull’s eye of Lyme Disease. Patients may also experience fatigue, headache, fever and muscle pains. This disease is the least known of the bunch. The cause is not known, or whether antibiotic treatment is necessary or even beneficial for patients with STARI. Have you had one of these charming diseases or Lyme Disease? Let us know what happened in the comments.