How to Avoid Bee Stings and Wasp Stings

There’s nothing quite like stumbling across a bee hive, hornet colony, or wasp nest at the end of the season... 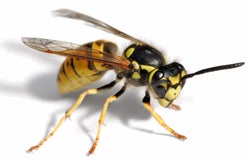 There’s nothing quite like stumbling across a bee hive, hornet colony, or wasp nest at the end of the season when their ranks have swollen to the maximum from a productive queen.

These venom-slinging sharp shooters kill 50 to 100 people worldwide each year, which is greater than the number of people killed by all the other venomous creatures combined.

If that wasn’t bad enough, the end of the season makes many wasps extra feisty. The queens are usually the only wasps and hornets that hibernate through the winter, which means that all the worker hornets and wasps get kicked out as the hive disbands at the end of the summer. These pissed-off, displaced insects know their time is short and always seem most aggressive just before the first frost.

But these fliers aren’t our only concern. Africanized honeybees are defensive in nature and aggressive when it comes to protecting their hive and colony. A bee’s defense mechanism is its stinger, and when it is used a pheromone is released that alarms other bees in the colony to attack. Honeybees can attack in swarms of thousands when provoked, and cause anaphylactic shock in allergic humans, often resulting in death.

How do we keep off their radar? Alertness and awareness are the keys to avoiding bees and wasps.

You need to be aware of the appearance of:

And if you do run afoul of a hive or colony, run like hell and try to find shelter. Most bees and wasps will only follow you for 50 to 100 yards. Slather up your stings and bites with a meat tenderizer paste and count yourself lucky.

Tell us your best (or worst) bee or wasp story in the comments.