Rub-a-dub-dub, imagine spending 26 hours floating in the waters off Sitka, Alaska, in a 4-by-4-foot tub. That’s what Ryan Harris,... 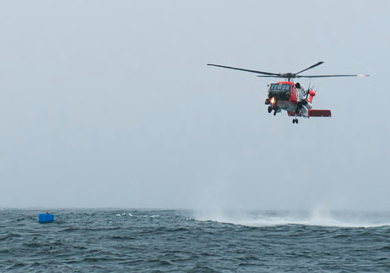 Rub-a-dub-dub, imagine spending 26 hours floating in the waters off Sitka, Alaska, in a 4-by-4-foot tub. That’s what Ryan Harris, 19, did late last week after the 28-foot aluminum boat he and a friend were fishing from capsized. The Coast Guard rescued Harris on Saturday, two hours after his fishing buddy Stonie “Mac” Huffman was found alive on a beach 25 miles northwest of Sitka.

The two men had been fishing for coho salmon two miles from Cape Edgecumbe when the hydraulics on their boat failed. They fixed the problem and started heading to port when a massive wave knocked the boat on its side, dumping the men into the water before they could send a mayday. “We had no radio, no cell phones,” Harris told the Daily Sitka Sentinel.

The two men climbed atop the overturned hull of their boat and managed to grab some empty fish totes that had floated free of the boat. Huffman stabilized one so Harris could climb in, but was unable to climb into a tote himself. He grabbed a tote lid and used it for flotation until he found one of the two survival suits that had been on board and managed to put it on. Soon, eight-foot waves separated the two men.

“I never thought I was going to die, but I was worried about Mac,” Harris told the newspaper. He says he gave himself a pep talk and kept repeating to himself, “I am Ryan Hunter Harris and I’m not going to die here.” He kept himself awake through the night by singing “Rudolph the Red-Nosed Reindeer” and “Row, Row, Row Your Boat.”

The Coast Guard dispatched four helicopters to search for the men on Saturday and Alaska State Troopers and Sitka Mountain Rescue sent four boats. Troopers found Huffman waving from the shore at Point Amelia. Harris suffered blistered hands and a cut above his eye.