Fall is here, and winter will be close on its heels. Odds are good that sooner or later you’re going... 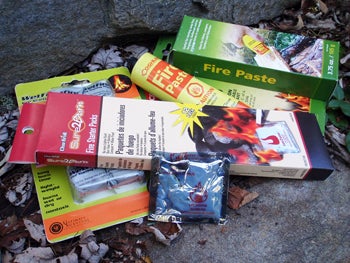 Fall is here, and winter will be close on its heels. Odds are good that sooner or later you’re going to run into some unexpected and nasty weather. Cold, wet conditions make fire building a top priority, but those same conditions make fire building tricky at best and a nightmare at worst. That’s when you need a trick up your sleeve, like fire starters.

Petroleum Jelly Cotton Balls
The classic cotton ball soaked in Vaseline is the most budget friendly fire starter on our list. If you pick up a bag of cotton balls and two jars of petroleum jelly at the dollar store, you can make 100 of them for about 3 cents apiece. Each of these little gems will burn for approximately 5 minutes, and can be used for other purposes besides fire building. Just make sure you store the balls in a waterproof container. When the weather turns warm, the petroleum jelly can melt and run out, fouling any equipment packed near it.

WetFire Cubes
These little cubes of white waxy material have always delivered impressive results for me. A package of 8 cubes retails for about $8. On average, each cube burns for 10 minutes, which is twice the burn time of the homemade alternative. The flame is always much taller on these than with the petroleum jelly balls, too. I have measured spikes of flame from WetFire cubes that were 9 or 10 inches tall, which is twice the height of that of a greasy cotton ball.

You can even chip off part of a cube to assist with fire starting, and then save the rest for later. A few shavings or chips of this material can greatly assist in the lighting of camp stoves and stubborn grills, too. Just make sure you use up the product within a few months of opening the package, as the cubes tend to lose flammability after being exposed to the air. They’re good, but they are also our most expensive fire starter, averaging $1 per piece.

Fire Starting Packets
This recent product innovation can be found in many stores, often sold next to BBQ grilling equipment and supplies. Most brands boast that they are non-toxic, odorless, and easy to use. The Char-Broil version retails for $4 for a package of 12 packets. Each package is sealed and waterproof; and it can be lit without opening it up. They burn furiously, better than WetFire–and they’re cheaper than WetFire, too! How about a lifesaving piece of gear for 33 cents?

Fire Paste
Fire paste (or fire ribbon) has been called “napalm in a tube.” It is sold by several different companies, and ranges from $4 to $15. There doesn’t seem to be much difference in the performance of the high dollar version, so I would recommend that you stick with the cheap one. They all burn steady, and are somewhat wind resistant. A bead of paste about 3 inches long will burn for 3 to 4 minutes. It’s also fine if you are frugal with the paste. Spread it thinly on some tinder or smear it on a piece of bark to make it go farther. You’re in charge of the serving size.

Comparing The Fire Starters
Any of these fire starting materials would be a lifesaver in cold weather or a wet-weather emergency, so I’m not interested in bashing any of them. Availability may be the biggest drawback for some of these products. The WetFire and fire paste may only be found at camping and outdoor stores. You may have to go to a hardware store or someplace that sells grills for the fire packets. But any drug store or grocery should carry the stuff to make petroleum jelly cotton balls.

In my test, I set out one unit of each product (using enough Fire Paste to equal the other volumes). Each one was lit with only a single match; the Fire Paste lit instantly and the PJCB took a little coaxing. The Char broil fire packet lit as the match burned away the wrapper. The fire packet produced the most flame of the four and burned for a full 10 minutes. The WetFire cube also burned for 10 minutes, but the flames were not as strong as those of the fire packet. The fire paste came in with the shortest burn time, just 4 minutes, while the ball burned for 6 minutes.

Do you have a favorite fire-starting aid? Let us hear it in the comments.