Have you ever had that dessert called “worms and dirt”? Generally, it’s some kind of chocolate and gummy worms. But... 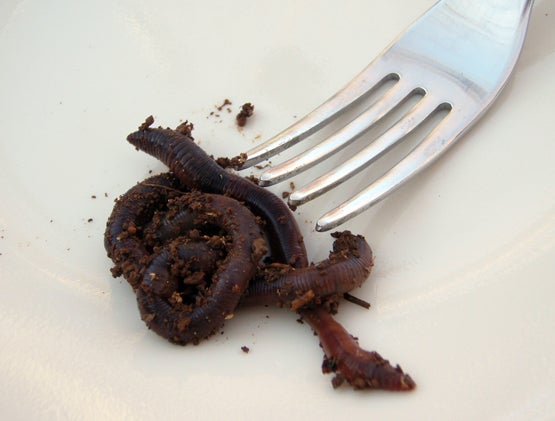 Have you ever had that dessert called “worms and dirt”? Generally, it’s some kind of chocolate and gummy worms. But how about the real thing? Something has usually gone wrong if you are thinking about eating actual bugs. But for argument’s sake, let’s suppose you did run out of food and required some protein sustenance. Which bugs would be the safest choices for you to eat? Here are three groups of creatures for the adventurous diner.

Earthworms
There are many different species of worms throughout North America. All are considered safe for human consumption, but they should be purged of the dirt that fills them before you try to eat them. An easy way to clean them out is to place them in a container of damp grass. After a few hours, the critters will be void of the dirt and sand they normally hold. Like all animal foods, worms should be cooked before you eat them. I recommend frying. The good news is that fried worms taste a little like jerky. The bad news, average sized worms provide only about 1 calorie per gram (not counting the fat from frying).

Crickets, Katydids and Grasshoppers
This diverse group of bugs is generally safe to eat, if you avoid the colorful members of these families. Red, orange, yellow, and blue colorations are usually warning signs. The heads and small legs should be removed, and the bugs should always be cooked thoroughly. Bugs with crunchy shells are often the most parasite laden. Hunt for them in the early morning, when they are less active from the colder temperatures. This group yields approximately 4 to 5 calories per gram. They range from flavorless to fatty tasting.

Termites
Ripping open a rotten log may seem like a lot of work, but the payoff might be worth the trouble. Termites have the highest calorie content of the bugs on this list. These pale colored, ant-looking insects provide about 6 calories per gram. You’ll have to work to get the nutrition, though. These little guys go scurrying for cover anytime you damage the wood in which they reside.

Hungry for more details? Check out www.ent.iastate.edu. Have you eaten bugs? Did you lose a dare or just wanted to try them? Let us hear about it in the comments.