Before the real heat of summer sets in, the month of June can provide a great number of tasty wild... 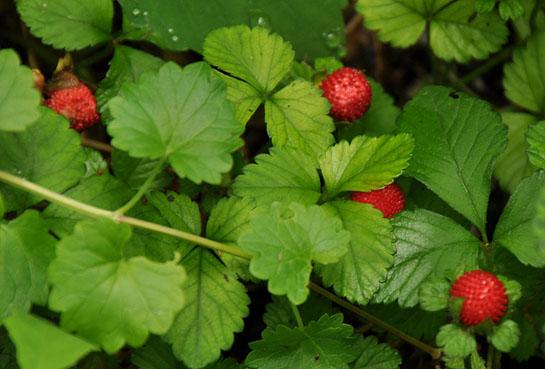 Before the real heat of summer sets in, the month of June can provide a great number of tasty wild edible plants. You’ll have to get a feel for the timing of this season in your area–maybe summer is running early or late where you live. Once you figure that what to expect, and go out to forage, you’ll see that there is wild food everywhere.

Early June
The first week or two of June can provide us with the first berries of the year, wild strawberries. These tiny, delicious red berries will ripen first in sunny locations, and you might later find a few lingering in shady spots. If you live further north or at higher elevations, wild strawberries might ripen more in mid-June. Real wild strawberries usually grow in woodland areas. They have tan seeds in dimples in the berry’s skin and are very sweet. You might also find the “Indian strawberry,” which grows more often in fields and lawns, and has red seeds that stand out from the berry’s skin. These have no flavor, but can be safely eaten. Early June also gives us great quantities of wild greens, which can be cooked as vegetables. Stinging nettle will lose its sting upon boiling or steaming, and it is rich in vitamins and minerals. Burdock leaves can be large, but still tender at this time. Boil those in two or three different changes of water to remove some of the bitterness. This first part of the month can even provide spicy salads. Look for the white flowers of watercress, as these peppery plants bloom in fresh, cold streams.
**
Mid June**
As the berry bushes start to ripen, look for highbush and lowbush species of blueberries. As with the strawberries, northerners and mountain dwellers will see their blueberries ripen later than southerners and lowlanders. This is a great time to grab tea leaves, too. Blackberry and raspberry leaves make a nice tea when dried. Brewed one tablespoon of dried leaf in 8 ounces of water. Spicebush leaves, red clover flowers, and wild mints can be used for tea, either fresh or dried.

Late June
Raspberries, blackberries, and black raspberries are coming into season in the lower, warmer areas during late June and early July. Great vegetables are available, too, like lamb’s quarters, cattail pollen spikes, and milkweed pods (boil those in changes of water like you would burdock).

How do you tell if you picked the right plants and berries from a safe place?

– Have positive identification with a good book, like Peterson’s Field Guide to Wild Edible Plants.

– Just because an animal ate it, doesn’t mean a person can safely eat it.

– Try one plant at a time so you can identify it if you end up having an allergic reaction.

Remember that last one, especially. Let us know your favorite June wild edible plants in the comments.