Survival Skills: How To Cook With Hot Rocks

Hot stones have been used for cooking for thousands of years. Three of my favorite rock-cooking methods are frying, boiling,... 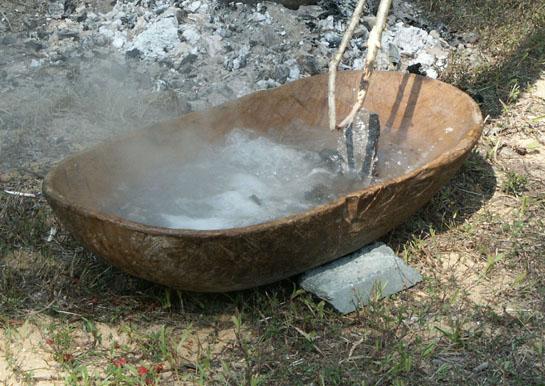 Hot stones have been used for cooking for thousands of years. Three of my favorite rock-cooking methods are frying, boiling, and stir fry. The upside to these methods is that they don’t require a lot of materials from home. Most or all of the gear for these low-tech culinary techniques can be sourced in the field. If you’re a careful cook, you’ll even make some meals that taste good. Seriously, this is nowhere near as nasty as you would think.

Warning: For all of the methods in this post, make sure you gather the rocks from a high and dry location, as waterlogged rocks can explode dangerously when they heat up in a fire. The steam builds pressure in the rock causing it to blow up like a grenade. Also, avoid slate and shale, as they are prone to explosion regardless of where you find them.
**
Rock Frying**
A large flat rock can be set up over a fire like a griddle, as I wrote about in an earlier post (link to hot rock frying Oct 2011), but a faster rock-fry method is to throw a flat rock directly in your campfire to heat it up. Using a stick, slide it out of the fire after 30 minutes. Dust off the ashes, grease the surface a little bit, and fry away. Bacon is great this way, assuming you brought bacon from home. It lays flat and doesn’t curl up too much. Reheat the stone after frying a few things, and you can use that rock many times over.

Rock Boiling
This method involves egg-sized or smaller stones that are heated in your fire for 30 to 45 minutes. Twenty or more stones are required for most of your water boiling and cooking tasks. Scoop them up with sticks or tongs and drop them into water or a soup or stew. I’ve used wood or bark containers to boil in, as well as a deep hole in a rock. I’ve even boiled with rocks in a hollowed-out pumpkin at Halloween (pumpkin and butternut squash soup).

Rock Stir Fry
Stones like the ones used for rock boiling can be used to make a mean rock stir fry. Move them out of their heating fire after 30 minutes and quickly quench them in some water. This gets the ash off, and brings the temperature of the stones down to a level that shouldn’t burn your food. Add the hot stones to a large bowl with a little oil and your meats and vegetables. Stir the stones and ingredients until the meat is well done. However, if you fail to stir it enough, I promise you it will burn. It’s called stir fry for a reason. Heat up 10 or more stones for a rock stir fry.

Let us know if you’ve tried any of these methods, and what you cooked, in the comments.