The new survival book, A Failure Of Civility, presents a gloomy, disturbing, and occasionally horrifying look into a possible future–one... 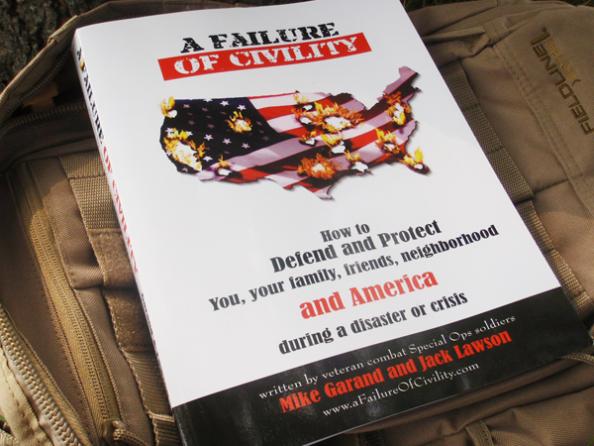 The new survival book, A Failure Of Civility, presents a gloomy, disturbing, and occasionally horrifying look into a possible future–one in which this book would be really useful.

Before we get started, you should know that some folks may take issue with some of the content in this book. But the image of a burning United States on the cover ought to deter those who may be offended by such content in the first place. A Failure Of Civility was written by veteran Spec Ops soldiers Mike Garand and Jack Lawson, and is filled with true stories of survival and dramatized tales to illustrate concepts of teamwork, planning, and unexpected danger. In addition to their military careers, both authors have been involved in law enforcement and are able to present a wide range of self-defense strategies. The book brings together combat experience, the science of criminology, tactical skills, and military maneuvers–knowledge that could prove invaluable if you ever became fully responsible for your own defense, the defense of your family, or that of your neighborhood.

A Failure Of Civility outlines the steps to create a Neighborhood Protection Plan. This is a reactive form of a “neighborhood watch,” in which the residents of a building, street, or community can pull together quickly in the event of a serious disaster situation. The book contains plans to rally your neighbors and create a local security force. An NPP isn’t meant to replace local law enforcement or to serve as a militia. It’s a group of residents standing in place, trying to protect their homes in the event of a sizable emergency.

The detailed description of what life is like in a place with no functional infrastructure or law really resonated with me. The filth, the illness, the stench, the constant need to stay alert, and the inability to get a good night’s sleep are all presented in a way that speaks of firsthand knowledge. These men have lived through it all in countries around the world. This is grim stuff, but fascinating stuff nevertheless. If this seems like a book that you would be interested in, you can find out more at www.afailureofcivility.com.