Being snowbound is a bit like being stuck in a life raft in the middle of the ocean. In both... 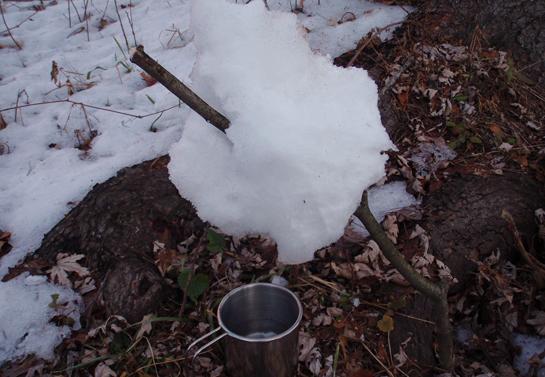 Being snowbound is a bit like being stuck in a life raft in the middle of the ocean. In both cases, you’re surrounded by water, but it’s not suitable to drink unless you do something to it first. In the raft, you’d need a solar still or a reverse osmosis filter. But what’s the approach with snow?

Since you’d be in a condition cold enough for snow, eating the stuff to stay hydrated is out of the question. Weather that’s cold enough for snow is plenty cold enough to give you hypothermia, and chilling your body core directly with snow is the last thing you’d want to do. It would also take too long to hydrate with snow. Snow is mostly frozen air. Depending on the snow crystal type and size, most snow is about 9 parts air and 1 part frozen water. This means that you’d need to eat 10 quarts of snow to have one quart of water in your belly.

Getting a fire going to help you melt the snow is a great idea, but you can add one more thing to your bag of tricks: Make a Swedish Marshmallow. Don’t get too excited, it’s not a mallow for eating, but from a distance, the resemblance makes sense. It’s a big white blob on a stick, next to a fire, hence the name.

For best results with this snow melting system, select a strong stick with 2 or 3 branches that look something like a trident. Next, skewer a large ball of snow onto those trident tines. Stab the base of your pole into some packed snow, or place a few pieces of fire wood around the base of your stick to hold it up near the fire. Once the marshmallow starts dripping water, place your cup in a strategic spot to catch the melted snow and wait for it to fill up. Keep adding fresh snow to the existing snowball to turn this into a non-stop water dispensing machine.