Survival Skills: How to and Why Make Bone Broth

If I could get back all the wild game skeletons that I have discarded the years, I’d do it in... 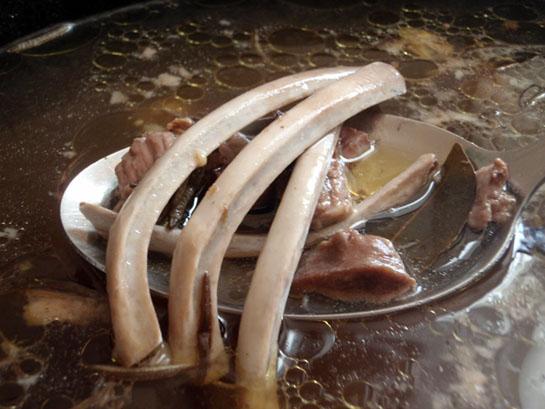 If I could get back all the wild game skeletons that I have discarded the years, I’d do it in a heartbeat. I’d also have a very creepy freezer that would scare the kids, but that’s what you get when you venture down the path to make broth from bones.

Take a look at the culinary traditions from distant history, and you’ll find that many of the cultures that had mastered the production of large cooking vessels were also making soup in those pots, sometimes perpetually. Since the cooking fire was both the heat source for the home and the cooking hearth, these fires ran constantly in colder weather and gave the home dweller a never-ending heat to make soup. What kind of soup, you may ask? Soup from whatever they could get their hands on. And very often, meat and fish bones were common items in this stock. For every bowl of broth pulled from the pot, a bowl full of water was replaced and a few more edible tidbits added. This meant that a warm and nourishing source of nutrients and a safe form of hydration was always available.

Why make it today? There is a growing movement of health conscious people who are eating “traditional” diets, and broth made from bones is one of the ancestral superfoods that is gaining modern attention. Broth from bones is touted to contain minerals that fight tooth decay and osteoporosis. Bone broth is also believed by some to support the adrenal glands, and even fight arthritis and other degenerative diseases. It doesn’t even taste bad. In fact, some of the batches I’ve made tasted really good. But all that aside, bone broth is one of those aces up your sleeve to pull out during a survival situation in order to provide nutrition and boost morale should your food supply run low.

Become A Bone Collector
Every successful hunt can be a source of soup bones, but don’t be squeamish in a survival situation. A fresh kill by a predator is often a wealth of bones and marrow for a lucky scavenger. In cold or sub-freezing weather, a gnawed up pile of bones can keep outdoors for a long time. Boil them thoroughly to kill any pathogens that they may carry. Just make sure you avoid rotten or foul smelling bones (survival or not) and avoid old bones. You can use fresh or frozen bones for your broth. Any meat still on the bones is a nutritious bonus. You can even mix species if you want to. Add a few fish skeletons to the pot, and then some fowl bones. Mix up deer bones with some feral hog bones. And if you’re not on a survival trek, hit your local butcher shop or meat processor. At home, your freezer is the perfect place to store all of your bones until you’re ready to make broth. Finally, be aware of diseases that your local animals may have. In areas with chronic wasting disease or American sheep disease, you may want to skip the bones from four-legged animals. Regardless of the conditions, only use bones from healthy looking animals.

Broth Preparation
At home, grab your biggest crock pot and fill it with water. In the field or in a survival scenario, use whatever boiling vessel you can find with the cleanest water available. Bring the water to a boil and add your bones. One pound of bones to one gallon of water is a good ratio. The bones can be cut into pieces with a saw, cracked into chunks with a blunt object, or you can leave smaller bones intact. Boil for an hour and then drop the temperature to a simmer. Keep the container simmering for 24 to 48 hours for maximum nutrient extraction. At home, set it for a little over 160 degrees, and you won’t have to worry about bacteria growing in the brew. Check with a thermometer if you’re not sure. In the field, good luck to you. Keep the pot on the side of the fire, and keep an eye out for boil overs and broth evaporation. Add water to keep the liquid at its original level. In a home crock pot, you can leave the bones on “simmer” up to one week, adding water as you pull out broth. Yes, a week. Just make sure it stays at or around 160 degrees. In various diet plans, you can find recommended broth intake levels anywhere from one cup to one quart per day. For recipes and additional nutritional info, check out this site or start prowling the web.

Drinking
From a survival point of view, making a broth or soup from any small game (or pieces of large game) is a great way to conserve the nutrients. So much of the fat (precious calories) and minerals end up in the soup stock when making a liquid meal from your wild game. This is in stark contrast to cooking over an open fire, where the fat melts and drips into the fire (calories lost). You can simply drink the broth as a beverage, or even better, add some wild greens and foraged veggies to turn it into a proper cup of soup.

Be conscious of food safety while preparing your bone broth, and enjoy the drink of ancestral champions.