A white-out storm during a hunt or a vehicle stuck in a snow drift can often lead to a deadly... 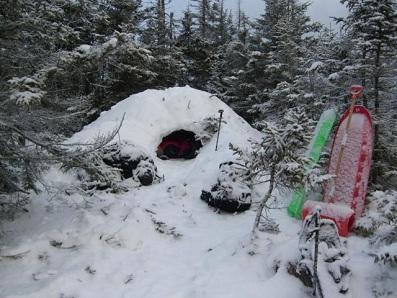 A white-out storm during a hunt or a vehicle stuck in a snow drift can often lead to a deadly serious situation. But, strangely, that same snow is a versatile and useful substance that can help to get you out of trouble. Here are my ten favorite ways to use snow for survival purposes. Your first concern in an emergency is shelter. Snow can be turned into many styles of survival shelter. From igloos and quinzees to snow caves and tree wells, a shelter of snow can mean survival on a sub-zero night.

Your second survival priority is water, which snow can also provide. Just be sure to melt it first for safe consumption. Boil the water if the snow is old and potentially contaminated by animals.

Snow can also help you signal for help. Stomp out a giant SOS in a snowy clearing, or mark the snow in a rescue provoking pattern. Powdered charcoal and many other substances can color the snow, allowing you to “write” on the snow’s surface.

Fourth, use snow to create temporary trail markers. Build a few pylons that are snowman sized and shaped, and they can blaze your trail in an ocean of white. Use these as you would use cairns built of stone. Use colorants, if possible, to help you spot the white pillars against the white background.

Fifth on our list is food preservation. Use snow to keep your foods from spoiling. The ultimate example is the Paleo-Indian ice cache. Pits were dug on the north side of rock outcrops, where snow is slow to melt. According to archeological evidence, the pits were filled with meat and the whole thing was buried in slush, snow or ice. Meat stays frozen, critters stay out.

Snow makes a great cold pack for injuries. Just fill a plastic bag with snow, wrap it in some cloth, and hold it on sprains and strains.

Seventh, snow makes excellent funnels and fencing for trap sites. Build walls, holes, paths, and other structures to direct your prey to just the right spot.

Snow is great for tracking. Even a novice can see the secret lives of animals laid bare. Learn which species are present, find out their numbers, and follow their wanderings by tracking them in the snow.

Ninth, you can eat it. While you don’t want to do this for a water source or if you are at risk for hypothermia, you can eat a little snow almost as a snack. One delicious Native American winter treat is maple syrup drizzled over a dish of snow. It’s the original snow cone!

And my tenth favorite use: toilet paper. I know this sounds unpleasantly brisk, but snow is a solid material that is capable of wiping duties. When melted it can wash. So in one or two swipes, you’ve wiped and washed yourself. For best results, use snow that packs into a good snowball.