CC image from Wikipedia Most folks are quite familiar with Lyme disease and Rocky Mountain spotted fever, but these aren’t... 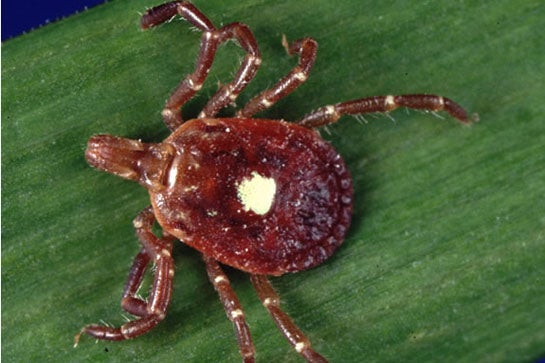 Most folks are quite familiar with Lyme disease and Rocky Mountain spotted fever, but these aren’t the only tick-borne illnesses that outdoorsmen need to worry about. The CDC lists 14 different diseases carried by ticks in the United States. Don’t let that scare you into sitting indoors all day. Just be aware of the threats and take steps to manage your risks wisely. Here are four common tick ailments that might not currently be on your radar.

1. STARI (Southern Tick-Associated Rash Illness)
This emerging illness is found in the southeastern and eastern U.S. and is transmitted through bites from the lone star tick. Symptoms include fever, tiredness, headache, muscle soreness, and joint pain.

2. Ehrlichiosis
This one is common to the Southwest and is also spread by the lone star tick. Dogs, cattle, sheep, horses, and other livestock can also be carriers. Symptoms include a fever and swollen lymph nodes.

3. Babesiosis
This disease is carried by deer ticks and is found most often in the Northeast and upper Midwest. Symptoms include a dry cough, headache, and growing fatigue.

4. Human Granulocytic Anaplasmosis
HGA is becoming more prevalent in the upper Midwest, New England, parts of the mid-Atlantic, and northern California. The most common symptom is fever, but headache and fatigue can also be present.

Prevent Tick Bites
The best way to avoid these ailments is to take every reasonable precaution when recreating in areas where there are ticks. These defenses include:

– Wearing long pants and tucking your pant legs into your socks. Yes, you look silly and I know it’s hot in the summer, but isn’t it worth the extra protection?

– Treating your outdoor clothing with permethrin, which not only repels ticks but also kills them. This stuff is pretty toxic, though, so follow the product’s instructions carefully, and avoid getting permethrin on your skin.

If you do find embedded ticks, pull them straight out from your skin, make sure you get the head, and don’t delay. Quick and complete tick removal can prevent disease transmission in some cases.

Getting Tested
Don’t be shy about visiting the doctor, especially if you have received tick bites that were followed by headache, any type of rash or reaction around the bite site, joint pain, or any other symptoms typical of known tick diseases. A dear friend of mine has become the poster boy for tick disease vigilance. Once an avid outdoorsman, he suffered from Lyme disease for several years as one doctor after another kept misdiagnosing his health issues. Finally, after several years of ineffective treatments for diseases he didn’t have, one doctor decided to rule out Lyme disease by doing two simple blood tests. When both came back positive, they finally had their culprit. Unfortunately, the damage had already been done to my friend’s body. His health issues and joint pain still persists after a lengthy treatment regimen, leaving him virtually homebound. Avoiding my friend’s fate is simple: Pay attention to your body, and get tested if anything seems wrong.

Have you suffered from a tick-borne illness? Do you have a secret weapon to keep them at bay? Let us hear it by leaving a comment.