Can you get anything worthwhile for $1.49 anymore? And gut-twisting dollar-menu burger doesn’t qualify—I did say “worthwhile.” What about survival... 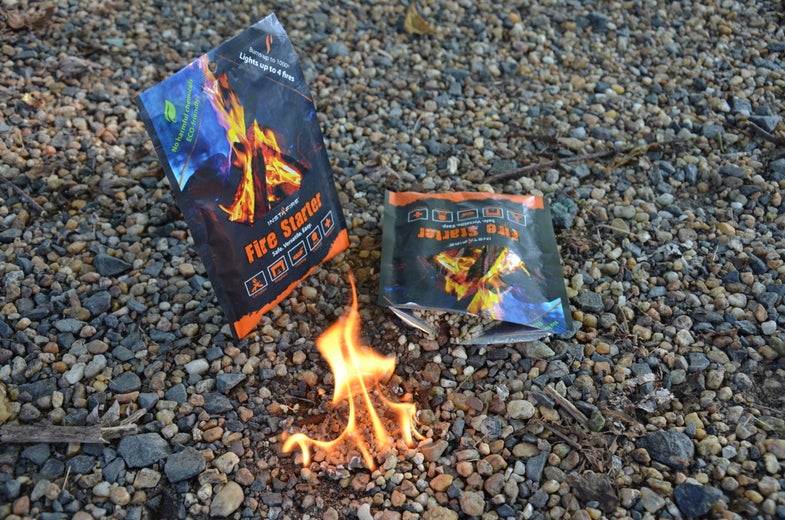 Can you get anything worthwhile for $1.49 anymore? And gut-twisting dollar-menu burger doesn’t qualify—I did say “worthwhile.” What about survival gear for less than $2? Even the cheapest of gear will still run you more than a couple bucks. But at a recent survival trade show, I stumbled across an impossibly cheap item that I just had to try out. It was a pouch of fire starter material touted to light up to four fires, and it only cost six quarters. So how did it stack up?

I opened the package and found a strange-looking granular material. For a second, I thought I had been swindled into buying some very expensive cat litter sprinkled throughout with rabbit food pellets. The ash-gray granules and the chocolate-brown pellets didn’t appear particularly flammable. There wasn’t even a scent of fuel or volatiles that suggested the stuff could start a fire. Then I dumped about two tablespoons of the material in the driveway and applied a lighter. It caught flame within two seconds, which was impressive enough. Then the two spoonfuls continued to burn for six minutes with a small, yet hot, flame. The flame wasn’t as tall as that produced with a Wetfire cube or some other volatile-based fire starter product, but it was respectable. And there was still enough material in the bag to make three or four more fires. I would absolutely recommend this product, especially since the price is so reasonable. The product even ships for free when purchased from the manufacturer.

Here are the specs:

• Burns up to 1,000 degrees F
• One water-proof pouch only weighs 1.75 ounces
• It’s safe to store near food stuffs
• It’s made in the USA
• It actually works!
• And the MSRP is $1.49 for the single use pack. Larger sizes, even buckets of the material, are available on their website at www.instafire.com

Do you have a favorite fire starter? Wetfire? Vaseline and cotton balls? Tell us which one you like best