Survival Skills: How to Survive a Rioting Crowd

Ferguson. Baltimore. Is your town next? When a crowd takes on a collective consciousness of its own (and starts wrecking... 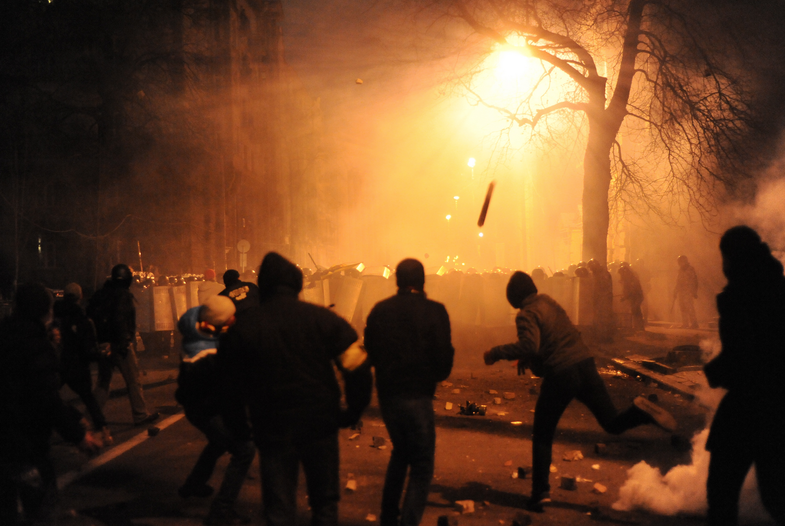 Ferguson. Baltimore. Is your town next? When a crowd takes on a collective consciousness of its own (and starts wrecking the place), this is what you’d call a riot. And the bigger the crowd, the lower the mob’s collective IQ. People may start out by peacefully protesting a legitimate issue or even an unfavorable sporting event outcome, but once the numbers swell, things can take a bad turn. Cars start getting flipped, businesses start getting looted, and fires start burning in the streets. To quell the uprising, the local law enforcement personnel have no choice but to engage. Riots are scary, to be sure, but they are also survivable events. Regardless of where the riot is occurring or why people are upset, here are a few tricks you can use to get out of harm’s way and ride out this storm of civil unrest.

Stay Off The Radar
The safest place to be in a riot is far away, but if you do get caught in one—it’s best to blend in. Whatever issue has upset the people, just go with it. Chant the slogans that they chant, and say the types of things that you are hearing said around you. Don’t stick up for the opposition unless you’re trying to get a beating. Tell them what they want to hear. If they have their faces covered, pull your undershirt up over your nose and blend in. But ditch the disguise as you reach the edge of the event, you don’t need peaceful folks or law enforcement personnel getting the wrong idea about you.

Survive a Human Stampede
People react differently to panic. Some stand still. Others take off running and hollering. If you find yourself in a panicked crowd, you’re at risk of getting trampled. So act fast. Find some kind of substantial and immovable protection to hide behind: a large tree, a utility pole, a structural pillar, a wall, or a vehicle. Unless the mob is in full car-rollover-and-burn mode, you might even try taking refuge inside a vehicle until the masses have passed. If you do get trapped inside the stampede, stay on your feet and conserve your energy (don’t resist the movement). Keep your arms and hands near your chest so you can create a little space around you, and work your out of the crowd.

Deal With an Indoor Mob
Dealing with a panic stricken crown in tight quarters is a very dangerous scenario. A stadium riot, a concert stampede or Black Friday at Walmart can mean that there are a lot of amped up people in an enclosed place. If things get hostile, stay calm and look for an unorthodox exit that is not packed with people. Stores and other businesses almost always have a back exit. Make your way to one of those if you can. Don’t get pressed up against locked, stuck or constricted exit doors. Frightened mobs have crushed people to death, when the pressing them against unyielding exits.

Get Out of Dodge
If you find yourself in the middle of a riot, make your way to the edges where the press of people is thinner. Then find a path away from the angry crowd. Just make sure that your route is passable. Also be very careful not to get pushed up against a wall or fence where you could be trapped or even crushed by the press of the crowd. Find a safe spot to shelter and wait for the crowd die down. But if disturbances get louder or closer (or you smell smoke)—find a better place to hide.

Have you survived a riot? Tell us your story by leaving a comment.