While it’s not the warmest or most logical season to go foraging, winter provides us some unique opportunities to forage... 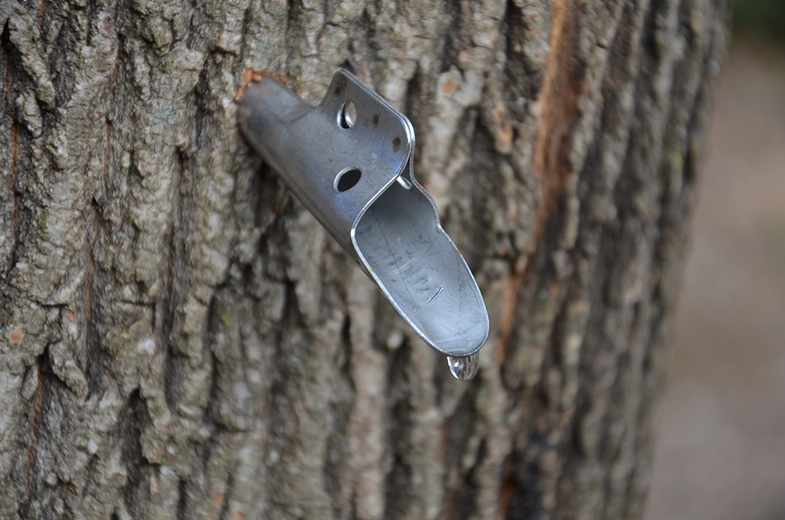 While it’s not the warmest or most logical season to go foraging, winter provides us some unique opportunities to forage for unusual winter wild foods. Most people have never heard of black walnut or hickory syrup, but both are made with the same process used to create maple syrup. And while you’re out there on your sap line, be sure to take advantage of two great opportunities to add some spice to your sugar.

Wild Syrup
Friendly and familiar, maple syrup (or some facsimile thereof) graces many a breakfast table across the US. But the maple isn’t the only tree that produces sap. Sycamore (Platanus occidentalis), birch (the genus Betula), hickory (the genus Carya), and black walnut (Juglans nigra) sap can also be converted into syrup—black birch syrup is particularly delicious. And if you were wondering, it’s okay to blend and boil down the saps of different syrup trees.

I drill a 7/16-inch hole about 3 inches into the tree and hammer in a spile. This is a conical tube that directs the sap flow into a hanging container. Collect your sap as each container fills, and boil down the sap outdoors (the process produces too much steam to do this indoors) until its consistency is, well, syrupy. February is the best month for sap production for most tree species. It will take 30–50 quarts of sap to produce one quart of syrup, but it’s well worth the trouble.

Spicebush
An inconspicuous eastern shrub, spicebush (Lindera benzoin) is native to eastern North America, ranging from Ontario to northern Florida and west to Kansas and Texas. It easiest to identify these 5- to 15-foot-tall shrubs in the fall, when they are covered in red berries. But their unusual flower buds and the spicy citrus odor of a broken twig should be enough to lead you to it without the telltale fruit. Spice bush has alternate branching (like most plants), but mature specimens have small round buds scattered across the twigs and smaller branches, often in pairs. These will be the shrub’s yellow flowers, some of the first of spring. Once you see these pairs of round buds, break a twig and take a sniff. If the buds look right, it has alternate branching, it’s in the geographical range mentioned, and it smells like citrus and spice, you have spicebush.

Break a few twigs into one-inch pieces until you have a palm full. Drop these into scalding hot water and let them soak for 10 minutes. Once cool, sweeten and drink as a tea. You could also use a big fistful of twigs in your brew kettle for a spicebush twig ale, one of the best alcoholic beverages I have ever produced.

Hickory Bark Spice
I use the term “spice” loosely here, but it’s the best fit as a descriptor. Shag bark and shellbark hickory (Carya ovata and Carya laciniosa) are trees native to eastern and central states. They are a source of syrup, as mentioned above, but their bark also has another use.

Strips of the loose, exfoliating bark can be simmered in milk to add a flavor similar to vanilla. This milk can be used to churn out ice cream, or if it’s too cold for that, eggnog. You can even use the flavored milk in your baked goods to bring a taste of the wild indoors.

Are you out foraging this winter? Tell us what you’ve found by leaving a comment.