Video: How To Make and Use a Deadfall Trap

Trapping season is winding down, but that doesn’t mean that we should ignore trapping until next winter. Trapping can be... 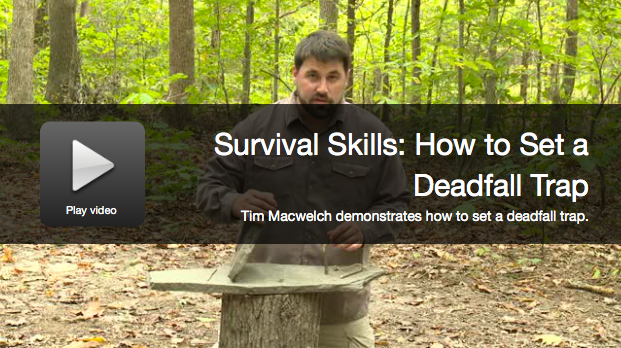 Trapping season is winding down, but that doesn’t mean that we should ignore trapping until next winter. Trapping can be a valuable form of calorie collection, both in emergency situations and when times are tough. My father and his siblings practically lived off the rabbits they trapped during the Great Depression. One of the easiest traps to improvise is a deadfall, which is a category of traps that uses a weight to crush an animal. However, you can also use a deadfall trigger to set up a crate or box to make a live trap.

Many of these triggers can be field-built with little more than a knife, and some can even be built with one’s bare hands. In this video, we show how to build one of the best “tool-free” traps, the Paiute deadfall. This very clever trap dates back hundreds, if not thousands, of years to the early Paiute Indian nations. Like all other deadfalls, this one utilizes some type of weight (often a rock), and a trigger system to hold the rock up in the air until your future meal finds its way under it. The difference between this deadfall trap and the rest of them is that the stronger and more sensitive trigger can be fashioned without any tools. To make this trap, simply break a few sticks into the right size and shape with your bare hands, scrounge up a few inches of string and some bait, and locate a large flat rock.

Do’s And Don’ts
Before you build your trap, keep these things in mind to save yourself some time and frustration.

DO use a bait that will target and entice the species you are after.
DON’T just bait randomly to see what you get.

DO use carefully chosen trap pieces, not the first rotten sticks you lay your hands upon.
DON’T ignore craftsmanship. Each trap should be a carefully created and balanced machine. If you just throw some sticks together, your results will reflect the effort you put in (or didn’t put in).

DO check your local trapping laws to find out if deadfalls are legal in your area, and obey the local trapping regulations and procedures.
DON’T use illegal traps, unless you’re in a legitimate life-or-death situation and you’re starving.

DO realize that this is a numbers game. Typically, you have to set a lot of traps to get one animal.
DON’T give up on trapping if it doesn’t work right away. This is a skill that takes time to become proficient at, and it still takes luck once you do become proficient.