Like I said in Episode 1 Season 2, “Bacon even makes a dog turd taste good!” Bacon makes everything better.... 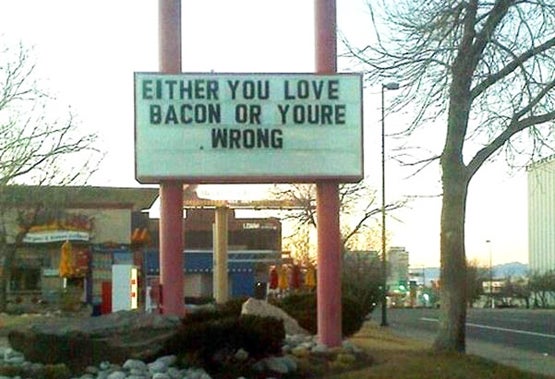 Like I said in Episode 1 Season 2, “Bacon even makes a dog turd taste good!” Bacon makes everything better. This past week we were up in the mountains of Idaho, hungry enough to eat the mud off the bottom of our boots and what was the first and only thing we threw into the skillet? That’s right– four pounds of bacon. We were just a bunch of stinky, greasy, tired, unshaven mountain men hangin’ around the fire eating bacon. Nothing better. I even threw a piece around a pinecone and tried it. Best pinecone I’ve ever eaten.

This week we’re looking for the best ways to use the greatest food ever! Let’s hear it people.

Here’s mine: Bacon Air Freshener. #1 way to freshen up any stanky camper, tent, pickup, bathroom and everything anywhere.

Write your funniest ideas in the comments section for the chance to win an ASAP Survival Gear Pack and Brunton lantern (valued at $200).

Congrats Tom-Tom on grabbing this weeks #1! Every week there are a ton of funny entries and it’s tough to narrow down.

Top Ten Reasons The Toaster Is Better Than The Batmobile

10.) from Wilkikyl: Well, when you are chasing the Joker in the Batmobile, you have to stop at the reststop to pee. In the toaster you can have Robin take the wheel and run to the bathroom.

9.) from illinoisburt: It has got to be the driver. Who the heck would want to hang out with some weird caped dude and his little friend in tights when Benny Spies is around? Toaster rules – let’s race and watch that Batmobile get stuck in the mud!

8.) from frommt: dead deer on the bumper and beer in the fridge would look stupid on the batmobile.

7.) from djohns13: Because guys in capes AREN’T allowed in the Toaster!!!

6.) from garry barnes: just look at the front of that thing,your killing bugs,gas millage,your first impression. all before you even arrive to your final location. the bat mobile may have lost a wheel and the joker got away,but the toaster is driven by the joker him self

5.) from Steven Houston: Unlike the Toaster, the Batmobile has neither Grain Belt Premium in the fridge, or rolling around on the floor. No contest

4.) from Hurckles: Because Benny would look stupid in the Batman suit.

3.) from ishipley: When the guy in the passenger seat says “holy” anything, you can beat the hell out of him and no one will say anything.

2.) from BubbaK: And, wouldn’t it be a bit… unseemly for the Caped Crusader to be seen running around Gotham with his young protege in a mobile love shack?? lol

1.) from Tom-Tom: You could drop a cheesey nacho and smash it into the carpeting of the Toaster and call it avant-garde interior decorating, and get a standing ovation from all occupants.