From the Ground Up

A New York hunting camp serves as a school for rookies, and higher education for hunters who want to keep learning 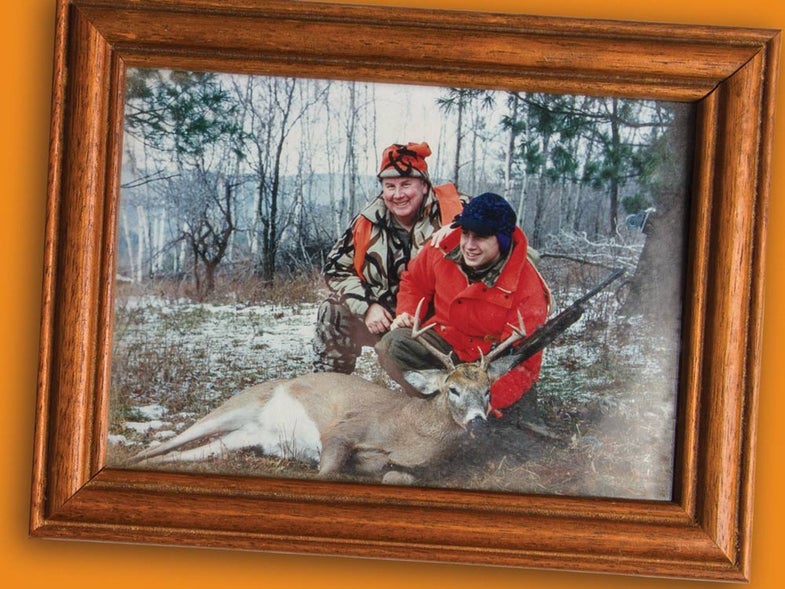 The first time Neil Dougherty walked the real estate that would become his family deer camp, he hated it. He was a flatlander, and the steep hills that make up much of what is now Kindred Spirits were unappealing to him in 1990. But his father, Craig, saw promise in the 150-acre property. It was affordable, it was located in a New York county inhabited by deer, and—most important—it was a place to call their own, which had been a dream since his own childhood. Neil didn’t like the camp name Craig cooked up, either. “Kindred Spirits” sounded lame to the teenager, but Craig overruled his son again. It was important to him that the name reflect a sense of community and belonging. “It was lost on me that people of like minds and friendships would want to gather here,” says Neil, now 43.

The first two hunting seasons saw the Doughertys and their buddies crowding into a pop-up camper. They were proud to host deer camp, but they decided to pursue more permanent digs to accommodate everybody. One evening, Neil climbed a towering pine and, watching the sunset, discovered the spectacular view from their little mountain. A construction site was born. Soon the father and son cleared timber and began building a cabin by hand, after school and after work, and on the weekends.

“As soon as I got out of high school on Fridays, we’d jump in the truck and drive down. I’d usually bring a buddy or two. At the time I didn’t realize it, but my dad was really good about letting my friends come,” Neil says. “If I wasn’t pounding nails or looking for deer, I was working on habitat projects.”

Neil spent much of his adolescence roaming the woods, all the while bowhunting and learning about deer on his own, with buddies, and from the seasoned hunters Craig invited to camp. As Neil and his pals learned to hunt and improve habitat, Craig learned to manage a group of young hunters.

The Doughertys expanded the one-room cabin in piecemeal fashion, building a bedroom here, a bathroom there, and eventually a sprawling back deck. The most impressive addition might be the kitchen with its big gas range, which were added with Neil’s grandfather in mind. Bob Dougherty wasn’t a hunter, but he reveled in his role as camp cook.

“He’d go to the grocery store and invite people over for breakfast,” Neil says. “We’d elbow him and say, ‘Knock it off, Gramps, we don’t want all these people coming to deer camp!’ He’d say, ‘Oh, he’s wearing a camo hat, he probably wants to come.’ Grandpa really had an open-door policy.”

But both Doughertys inherited their patriarch’s communal spirit, which still influences their approach to mentoring hunters. The bristling “Posted” signs encircling the property suggest otherwise, but those are intended only for would-be trespassers and poachers. Neil and Craig are generous with invitations. For nearly 30 years, they have introduced dozens of newbies to hunting at Kindred, in addition to offering experienced hunters a place to chase deer and, for some, a camp to call their own. They don’t have any rules about what kind of deer a hunter should tag. As long as the deer—whether it’s a doe, spike, or mature buck—excites the hunter, they are satisfied. That said, they don’t focus on one-and-done experiences. Both Doughertys hope returning hunters challenge themselves, and advance toward tagging increasingly mature deer over time.

“Every deer camp has a culture and a set of histories, and if you don’t appreciate our story, that’s okay. For some guys, we spend too much time talking about deer. We don’t seem to have any capacity to stop talking about deer,” Craig says. “But Kindred is a personal place that we have enjoyed sharing. It’s too special to be like Gollum down in a cave, hoarding it.”

They have also devoted more hours and dollars than they can count to the property, turning the original acreage into a sprawling complex of conservation experiments and, ultimately, developing superb deer habitat. For a spell, they opened Kindred to free weekend tours, eager to share their wildlife management expertise with others. All told, more than 3,000 people have learned about the property. Today, Kindred holds more deer per square mile than neighboring parcels because of the extensive food plots, bedding areas, and forage they’ve created. Craig and Neil have shaped Kindred over the years, and it’s returned the favor.

“It became a lifestyle,” says Neil, who works as an independent wildlife consultant. “It went from a place to go deer hunting to a place to connect at a whole different pace with the landscape, from habitat work to hunting. It was a place to explore new techniques and ideas. For me, it was a launching point for a career, and to support my family.”

Read Next: It’s Never Too Late to Learn to Hunt

Adapting Through the Ages

While many of Neil’s clients over the years have been serious about killing big deer, he says the folks who stick with hunting are also interested in the familial aspects of the sport. Kindred witnessed a similar progression in past years.

Neil and Craig have devoted themselves to fostering and killing mature bucks—no easy feat in the hard-hunted woods of New York State—and even wrote a few books on the subject. The cabin walls are crowded with mounts of handsome, heavy-beamed whitetails.

“The main drive was antler quality and pushing toward the trophy side of things,” Neil says. “And I almost feel like we’ve climbed that mountain, and the next evolution is saying, ‘Hey, we’ve got five or six shooter deer here. Come and have a good time and enjoy the place.’”

Just five years ago, the Doughertys weren’t so sure Kindred would endure. Neil was busy with his career and young family, and some original members had stopped coming to camp.

“The pillars of Kindred Spirits—me and my hunting partner—were beginning to show a little rot at the ground level. We’re getting a little long in the tooth. The only pillar left would have been Neil. The whole Kindred concept is very much collaborative, and I didn’t know who was in the chute to come along and bolster him,” Craig says. “You have to have a succession plan to bring the new breed on, the new generation, and the new generation of energy.”

Fortunately, those worries have faded as Neil’s kids have grown and started taking an interest in the place. They pick berries, catch frogs, and roast hot dogs over the campfire, spending a few weekends there each year. There’s also been a revival of folks returning to the fold and new hunters reenergizing the place.

In the kitchen at camp, chairs surround the big wooden breakfast table, each bearing the stenciled name of a core Kindred member. The idea is, if someone isn’t able to come for opening day, or has gone on to happier hunting grounds, he would still have a place at the table. Neil doesn’t have a chair—he hasn’t gotten around to claiming one. But he’s not in any rush. Deer camp will be there for generations to come.