This first-timer experiences the hard work, time commitment, and reward of hunting 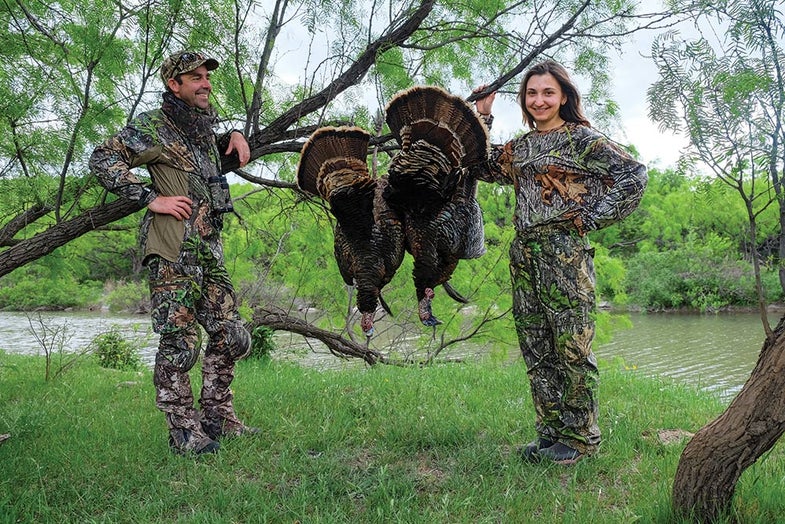 Andrew McKean poses with the author, right, who shows off the Texas toms she shot within minutes of each other. Outdoor Life
SHARE

Working in New York City as Outdoor Life’s editorial assistant, I process contracts for writers and photographers who contribute content about hunting, fishing, and shooting. I’m around these topics so much that I’ve gotten a pretty good feel for how and why people hunt, and I started to wonder if it was something I’d like to do.I grew up hiking, horseback riding, and spending as much time outdoors as possible, and it seemed like hunting might be a natural extension of that. But I considered it to be out of reach because I had no background in the sport and knew no hunters aside from my coworkers. So when Outdoor Life editor-in-chief Andrew McKean asked me to join him on a mentor-­mentee hunt last spring, I accepted the offer with excitement and a little bit of trepidation.The hunt was put together by Vista Outdoor, the company that owns brands like Federal Premium ammunition, Savage Arms firearms, and Bushnell optics. It was a turkey hunt in Texas, and the idea was that each veteran hunter would bring a first-timer.Andrew reviewed what I’d need to do: take a hunter safety course, purchase a license, research turkey hunting, and get my hands on clothes and gear.All those prerequisites are logical and right, but they seemed a bit daunting. I think a lot of people who might have an interest in hunting are like me—intimidated by the requirements and even the specialized gear necessary to hunt effectively. If you don’t have someone to guide you through all the steps, I think it’s a natural tendency to shy away from the sport in favor of pursuing an activity with fewer hoops.

I chose to take the Texas hunter safety course because it was offered online, as opposed to the New York State test, which is valid in all U.S. states and Canada but would require me to take my classes at an inconvenient brick-and-mortar location. The hunter safety course was a big time commitment, more than I’d originally anticipated. I spent hours on my weekends for about a month taking the courses leading up to the exam. I’m pretty sure I could have passed the exam without so much studying, but I was reading to learn as much as I could, not to simply earn the certification. It certainly would have been a faster process had I lived where I could accompany a hunter on their own hunt, to see it all in context, but I made do with the diagrams and online videos about gun safety and hunting regulations. Once that was complete, I reviewed Texas’ turkey-hunting regulations and purchased a nonresident spring turkey license online. The process was simple. The license arrived in the mail a week later.

For the sake of safety, and to boost my confidence, I decided I needed to get in some range time before showing up in Texas. I researched gun ranges in New York City and was lucky to find a rifle range located in the basement of a Manhattan office building. I fired a .22-caliber rifle, the first gun I’d ever handled, three floors beneath rush hour traffic in Midtown, and I left feeling more assured in my ability to shoot a gun capably and safely.

It would have been very difficult for me as a beginning, city-bound hunter to navigate my first trip without my coworkers—a network of supportive, knowledgeable outdoorsfolk. I did not know where I could hunt. Even if I were able to find land open to hunting, I wouldn’t feel comfortable going on my own. Plus, the time and resources to purchase gear and to travel to hunting areas were prohibitive. I was fortunate that my coworkers shared their knowledge and lent me gear and calls that I would have had difficulty finding and affording on my own.

This isn’t to say it can’t be done without access to an existing community of experienced hunters—it can. Beginners with drive can pick up the sport on their own. However, if hunters want to expand their numbers, reaching out so that the newcomer doesn’t have to dig deep to find them, then lending them their tips, time, and resources is the best first step.

Leading up to the hunt, I really reflected on why hunting matters, struggling with the feeling that it might be unnecessary or even cruel to shoot a wild turkey when I could just go to the store and buy my meat. However, my craving for a better understanding of my place in the natural world as a predator and not just a consumer won out.

I wanted the satisfaction of working to bring meat from the field to my dinner plate that was more free-range, natural, sustainable, and quite possibly more humanely dispatched than anything I could purchase at the store.

Once on the ground in Texas, I participated in a process that was both innate and totally alien to me—waking before sunrise, hiking pastures, sitting in full camo, and calling to turkeys. I filled my tags, taking two gobblers within minutes of each other.

When the time came for me to shoot, I was nervous but focused. My main concern was making sure I made a clean, ethical shot, and that the birds didn’t suffer. I was taken aback by their postmortem flapping—sickened by the thought that I’d maimed them—but Andrew and my guide assured me that this was normal.

Eating crisp-fried gobbler nuggets back at camp that night was deeply satisfying. I was really appreciative of my meal because I had put in the work to procure it. The awareness of the effort that goes into a single meal stayed with me, and it’s something I now think of when I sit down to eat. But it was the time I got to spend reconnecting with the outdoors, and the camaraderie of the hunt—listening to coyotes, identifying various birds, and heading into the field as a team with a common goal—that resonated with me the most, and why I’d do it again. I’m just waiting for another invite.