This massive, endangered stingray was hooked by accident and released unharmed 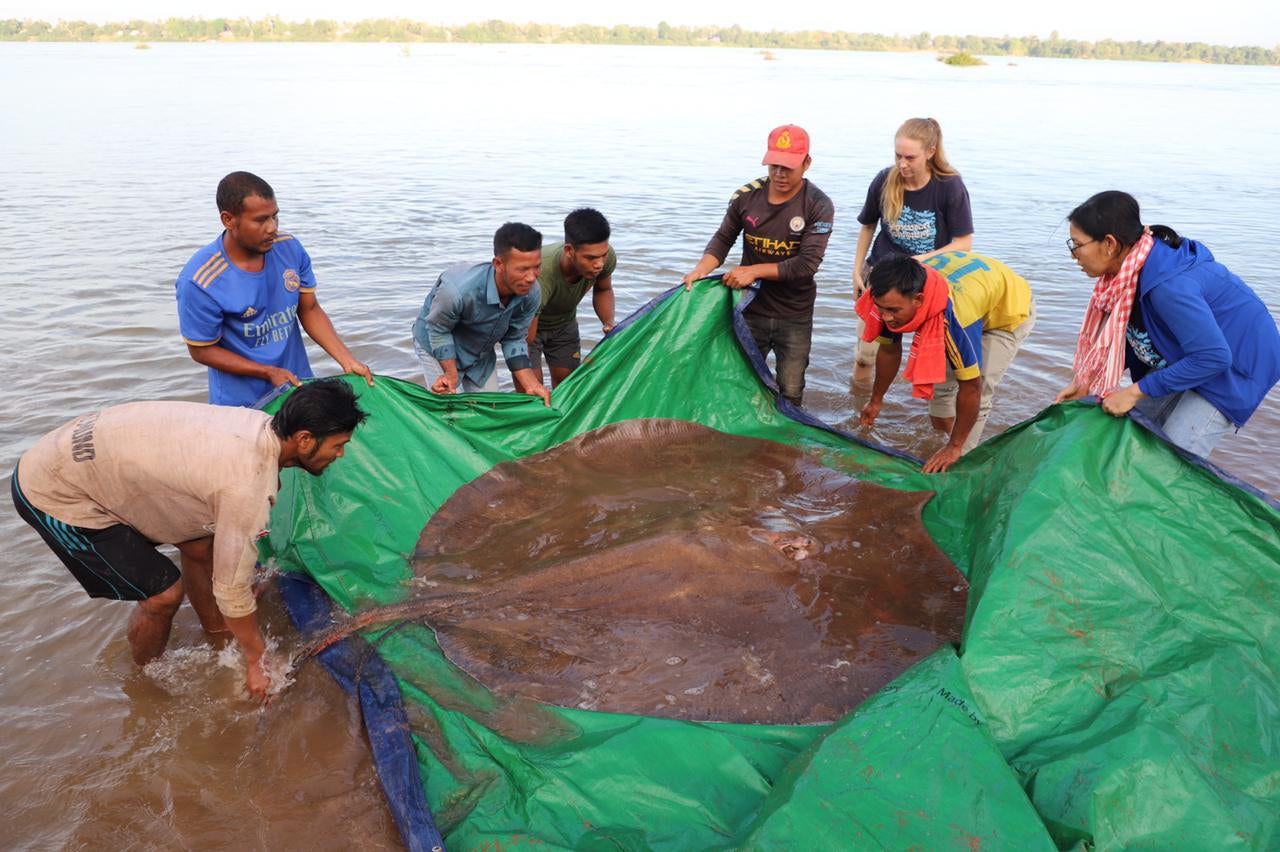 This giant ray weighed more than 400 pounds. Wonders of the Mekong – University of Nevada, Reno
SHARE

Marine biologists are celebrating the catch of a massive, endangered freshwater stingray on May 5 from the Mekong River in Cambodia’s northeastern Stung Treng province, according to a report by Reuters. The ray was an unintentional catch by commercial fishermen who were soaking bait in a 260-foot-deep river pool. The massive, rare ray was caught after it swallowed a smaller fish that had taken a baited hook, According to the Jakarta Post.

Following the catch, a team of visiting scientists from the Wonders of the Mekong project worked with the fishermen to unhook the ray before weighing and measuring it. They then returned it unharmed back into the very remote portion of the Mekong River where it had been caught.

The over 13-foot long, 397-pound freshwater ray is an important find in that region of the Mekong. The area’s biodiversity is threatened by the potential of hydropower dams being built on the river, according to scientists studying the region.

“This catch was significant because it confirms the existence of these big fish in the stretch of river,” fisheries biologist Zeb Hogan reported to Reuters.

Hogan led the USAID-funded Wonders of the Mekong scientific expedition that concluded its work last week in the area. He is a fisheries biologist from the University of Nevada.

“This is a very remote stretch of river, it’s not well studied, it’s incredibly important for fisheries and biodiversity, and it’s also a stretch of river that is under threat,” he said.

Wonders of the Mekong scientific expedition used submersible watercraft with cameras and lights to probe deep pools of the river during its study. Hogan says the Stung Treng province region of the river could have “devastating ecological effects” if proposed dams are built.

Illegal fishing and pollution also are adversely affecting the Mekong, says Hogan, who has 20 years of studying the river. He says declining freshwater fish populations in the region are troubling.

“Historically, this section of river produced 200 billion young fish that then during the flood season disperses throughout all of Cambodia and even into Vietnam,” Hogan said.

Experts believe giant stingrays are the largest freshwater species on Earth, according to National Geographic. The total population of these fish is unknown, and little has changed about them in millions of years. While this one was large, reports indicate they can grow up to 1,300 pounds, though accounts of fish that large have not been verified.