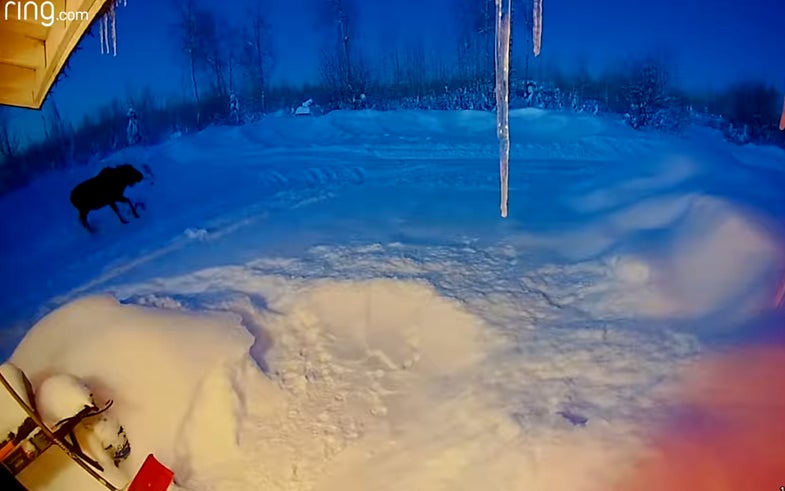 One of the antlers can be seen in midair as it detaches from the bull's pedicle and falls to the ground. Tyra Bogert / Facebook
SHARE

Some remarkable footage out of Alaska captures the exact moment when a bull moose sheds its antlers. The video was taken by a Ring doorbell camera in front of Tyra and Chance Bogert’s home in Houston, which is roughly 60 miles north of Anchorage. It’s common for locals to see moose in their driveway in the area, but few have ever witnessed a moose dropping its antlers, and even fewer have been lucky enough to capture the moment on video.

Tyra told NBC TODAY that she was blown away by the footage, which she was able to watch in real time thanks to a notification on her phone that the Ring camera had picked up movement in front of their house. Tyra was at her sister’s house at the time, and when she showed the video to her brother, he convinced her to post the video on TikTok and Facebook, where it quickly went viral.

At the start of the roughly 45-second video, the moose strolls in front of the camera and stops for a moment to look around. Then it shakes its body like a dog shedding water from its coat, and that’s when the incredible happens. While shaking its huge head from side to side, both antlers come off with an audible pop, pop and fall to the snowy ground. The bull’s startled reaction is priceless: It hops up and away from the fallen antlers and trots out of view.

The Bogerts recovered the sheds from their driveway, and the next day Tyra shared a follow-up video that shows Chance bringing them into the house. She told reporters that she comes from a hunting family, and they plan to mount the roughly 50-inch rack on their wall.

Read Next: Angry Moose Compilation Video Shows Just How Dangerous They Can Be

While the video is still incredibly rare, the Bogerts aren’t the first (or the only) people to film a bull moose shedding its antlers. A family in Laramie, Wyoming, captured similar footage through the window of their cabin in 2016 and they shared the video with National Geographic. In that video, the bull only dropped one of its antlers, which caused one of the family members to wonder aloud if the animal was in pain. But according to moose biologist Bill Samuel, who spoke with National Geographic about the video, the antler shedding process is thought to be painless. He said that the bull “likely experienced a sense of relief” afterwards.