The drama comes amidst calls to strengthen the U.K. ban on hunting with hounds by outlawing "trail hunting," which is more like a re-enactment than an actual fox hunt 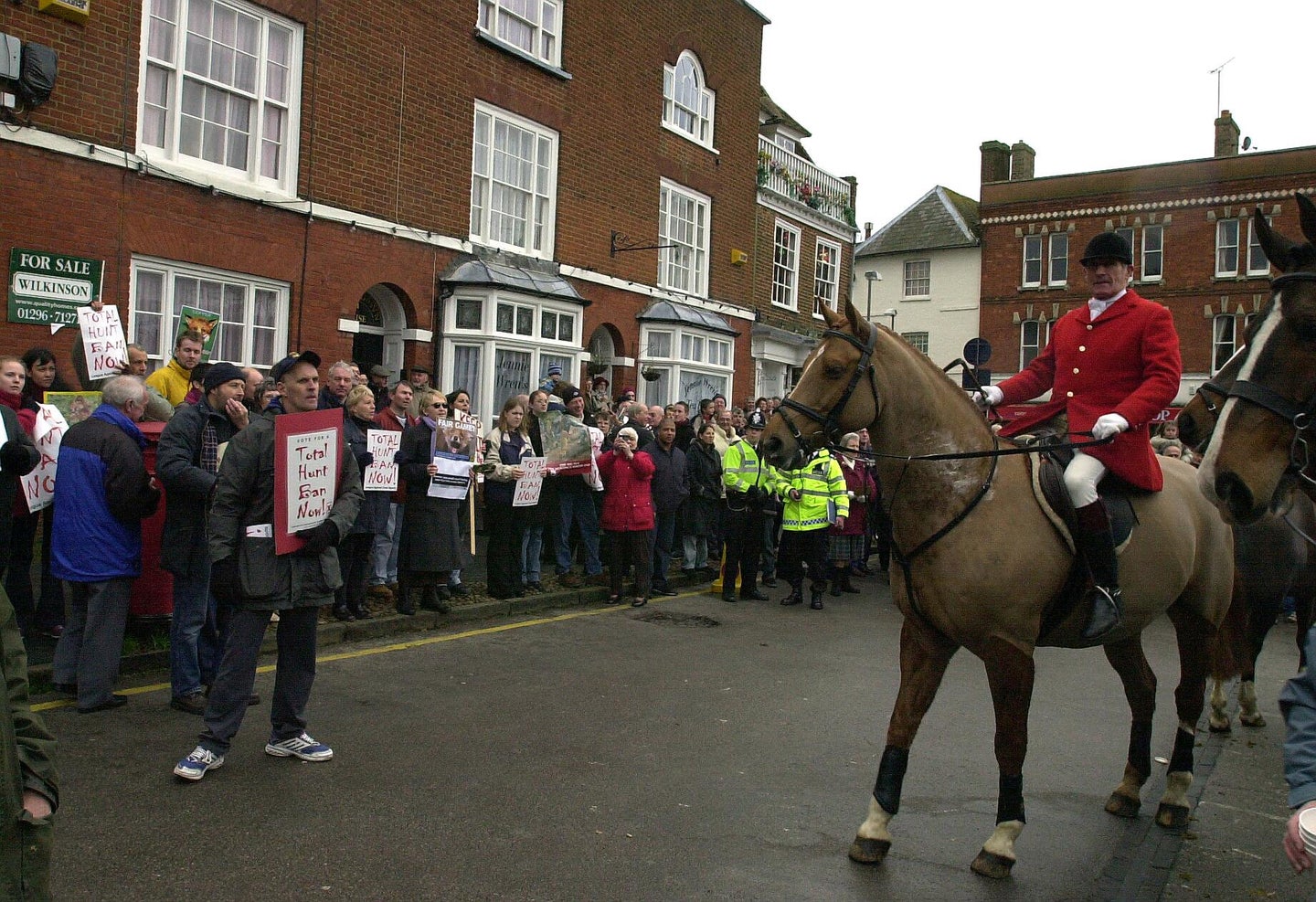 Protests go back to the early 2000s, around the time when traditional fox hunting was banned. Today, the protests have evolved to target "trail hunting.". Michael Stevens/PA Images / Getty Images
SHARE

Across the United Kingdom on the day after Christmas, crowds gather in the streets to witness what has long been a Boxing Day tradition. Dressed in traditional fox-hunting attire, residents trot their horses and run their hounds through rural neighborhoods in a fast-paced parade in preparation for a “meet.” Calling it a true “hunt” hasn’t been accurate since the early 2000s. Scotland outlawed hunting wild mammals with dogs in 2002, and England and Wales followed suit in 2004.

But rural communities quickly discovered loopholes in the laws and many now partake in “trail hunting,” which involves the hunters laying down a trail of scent with rags before the day begins. Once the meet is underway, the scene looks familiar. Hunters leap their horses over hedges and gallop across fields following their pack of hounds. But the hounds are following the pre-laid scent instead of actual foxes.

Trail hunting is meant to maintain the deep tradition of fox hunting without actively breaking the law. But some foxes are still killed on these hunts. A few are examples of a legal trail hunt gone awry, while others are the result of outright illegal practices. Convictions for illegal hunting number 438 since 2010, The Guardian reports.

Animal welfare organizations have long called for strengthened anti-hunting laws and they widely oppose the Boxing Day tradition, often in the form of protests during the parade. This year, the conflict got a little too heated and resulted in physical altercations across the U.K.

The above scene, filmed in the Welsh city of Newport, is like something out of a binge-worthy drama series. Activists with signs kick and shove at security officers lining the streets, some of whom look self-appointed. The security officers kick and shove right back. Meanwhile, riders dressed in red coats and helmets trot their horses through the chaos with varying degrees of success. Most of the horses aren’t too thrilled with the hubbub, some sidestepping into the crowd and others rear-ending the horse and rider in front of them. Cheers, clapping, and good wishes clash with boos, chants, and expletives. Dogs run rampant.

If the scene is messy, hunting laws and traditions in the U.K. are even messier. The Labour Party and shadow (or oppositional) environment secretary Jim McMahon want to see trail hunting outlawed, calling it a “smokescreen for illegal activity.” And while there is some sentiment in the controlling Conservative Party to roll back the hunting bans, it seems unlikely that such a move would gain any traction.

“People will see the hunts out today and not know that behind the finery is a so-called sport that sees public lives endangered on roads and railways, livestock worried by out-of-control hounds, and in some cases domestic pets killed,” League Against Cruel Sports campaign chief Emma Judd tells The Guardian. “Only by strengthening the law on hunting can communities, wildlife, and rural values be protected.”

“Boxing Day meets [offer] the public a chance to watch hunts showcase their hounds, horses and trail hunting activities.” she tells Wales Online. “They bring thousand of people together. Be it families, friends, neighbours or those within our community who may otherwise be isolated over the festive period.”

Read Next: Photos From the New Jersey Bear Season, the Highly Controversial Hunt That Wasn’t

If American hunters can agree on one thing, it’s that we should all be glad we don’t live across the pond. Whenever the controversy of land and wildlife privatization rears its ugly head in the United States, you can always count on someone cautioning against turning the North American Model into “the King’s deer.” A whopping 92 percent of England is inaccessible to the public. Hunting of all sorts is largely limited to either the wealthy, land-owning elite, or government stalkers and cullers charged with managing game populations with no natural predators. With that said, private land permission is somewhat freely given for the traditional Boxing Day events.