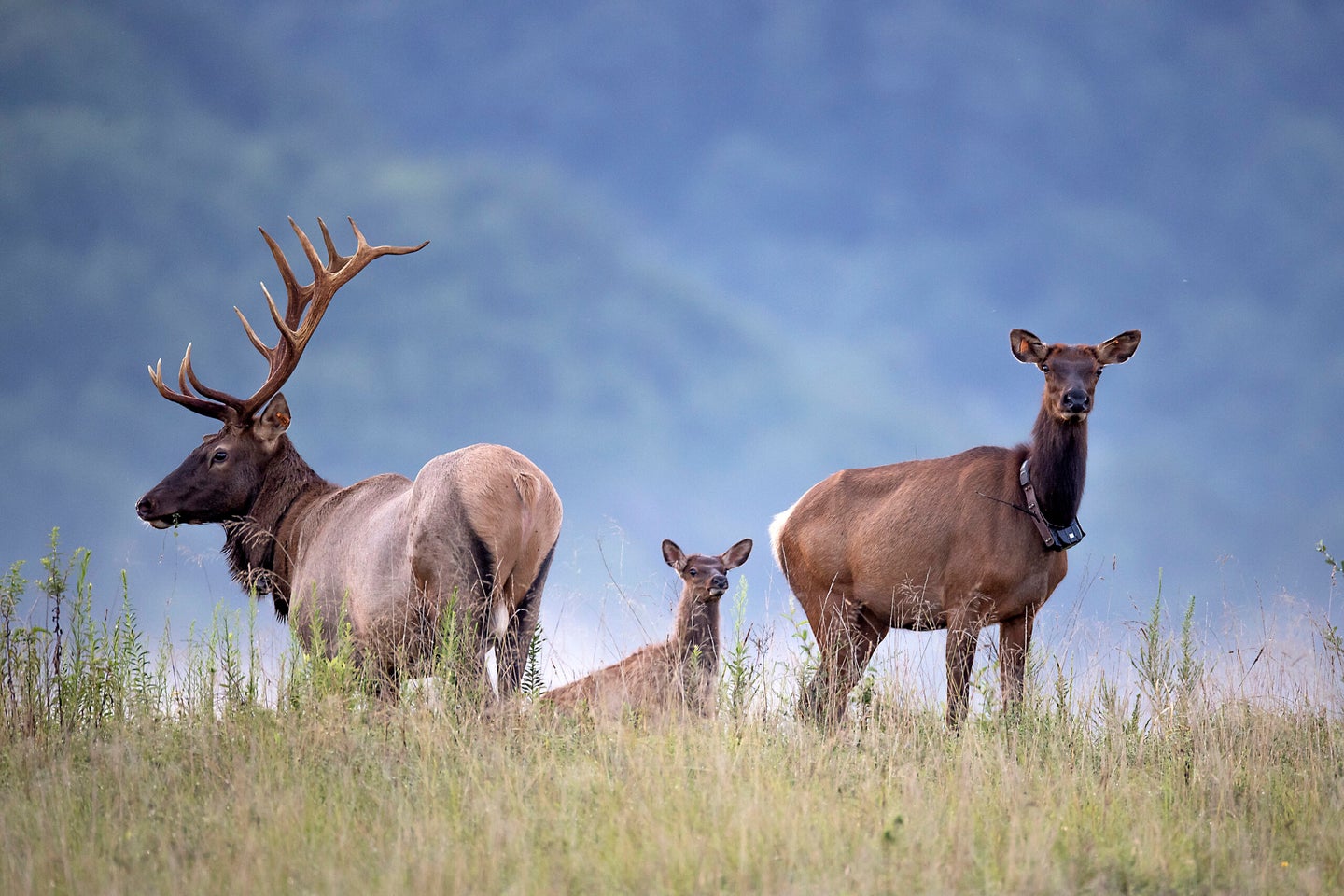 Hardly a day goes by that Randy Kelley and his staff in the West Virginia Division of Natural Resources aren’t keeping tabs on the state’s elk: Surveying habitat, monitoring animals with satellite GPS, replacing tracking collars, or any one of a hundred tasks required to grow the newest elk herd in the eastern United States. Kelley, a state biologist, has been the project leader since the program started in 2015.

In February and March of this year, Kelley, his team of biologists, and Division of Natural Resources wildlife managers are tranquilizing elk and replacing expired GPS collars, or placing collars on the young elk that have been born here.

On a day in early March, I ride to the bait site with Kelley and wildlife technician Jake Wimmer. Kelley dons scent-proof camo, loads an impressive looking CO2-powered dart gun, and disappears into a blind. Wimmer puts out more alfalfa hay and we quickly get in the truck and leave the area. We join the other crew members a mile away, and the waiting game begins.

Read Next: The Complete Guide to Hunting Elk in the Eastern United States

I join the rest of the crew as we wait for Kelley to dart an elk, taking in the bright sunshine—something we haven’t had for a while. The biologists are old hands at this, the talk is easy and comfortable between this group of wildlife professionals with good natured ribbing about different incidents on the job. Someone produces a new bass rod and begins casting down the dusty road to try it out.

I had expected a long wait, and I’m surprised when the radio crackles.

“We’ve got an elk down!” Kelley says excitedly. “Get over here!”

We all pile in the trucks and head that way. We find Kelley close to his blind, kneeling beside a sedated young bull elk. Now the team springs into action like a well-oiled machine. First, they roll the bull onto his chest so he can breathe more easily, then put a hood over his eyes to reduce stress. Each team member has a job: looking at health indicators like overall body condition, checking the elk’s teeth, taking a small biopsy punch for a DNA sample, and placing a new GPS collar on the bull. Although it is March, the air is cold, which is why the team is darting and collaring now; waiting until warmer weather might cause the elk to overheat.

The whole process takes maybe fifteen minutes and before I know it, Kelley is injecting the elk with a drug to counteract the tranquilizer and begin the wake up process. A few minutes later, the big animal gets to his feet—still a little groggy— and begins to walk off. Twenty yards away, he stops and looks back at us.

“They always do that,” one of the crew says.

The elk turns and wanders off into the brush.

Elk in the Mountain State

Many people don’t know that elk are native east of the Mississippi River. Market and subsistence hunting, along with habitat loss due to logging, decimated the eastern elk in the 19th century. Prior to the modern reintroduction, the last recorded sighting of a wild elk in West Virginia was in 1875.

The WVDNR received 24 elk—12 cows and 12 bulls—from the Land Between the Lakes in Kentucky in 2016 to start the reintroduction process. These were released in Logan County on the Earl Ray Tomlin Wildlife Management Area, a WMA that spans 25,000 acres of rough terrain in the southwest part of the state. In 2018, 60 elk were captured in Arizona and transferred to West Virginia, where they were quarantined for the USDA-required 120-day period before they could be released; nine elk were lost from the stress of capture and captivity. That same year, an additional 15 elk were received from Kentucky’s Land Between the Lakes, which were held in an 800-acre enclosure.

In 2019, West Virginia’s fledgling herd received a blow: an infestation of brain worms. Brain worm eggs are eaten by snails and slugs on the ground, and the new resident elk picked them up while grazing. It’s not uncommon for brain worms to occur in whitetail deer, although biologists theorize that most of the country’s whitetails have built an immunity to this parasite. The imported elk from Arizona, however, were acclimated to the Southwest’s dry, arid climate, and possibly had no previous exposure to brain worms. Kelley and his biologists estimate that as much as a third of the Arizona elk succumbed to the brain worm.

“We are actively pursuing other states to get more elk,” Kelley says. “There is a lot more to this that some people may realize, there are disease issues, government regulations, and I even had to get some special permits to allow our truck drivers to be on the road for 24 hours. People think you can just run out here somewhere and get some elk, it’s not that easy.”

Then I asked Kelley the question I know he must get almost daily.

“When are we going to be hunting elk here in West Virginia?”

“It’s going to be awhile,” he says. “Things could change, but based on our current growth, it could be within the next ten years…Like all cervids, the males are expendable to a certain point, so a limited harvest of some bulls would not hurt us if we got our numbers up to a certain point.”

West Virginia’s 2016 to 2020 management plan does not include a target number of elk that would allow for a huntable population—it’s too early for that. It does set the goal of creating a self-sustaining population, however, and provides context for how reintroductions in other eastern states fared. For comparison, Kentucky introduced elk from 1997 to 2002, and reached its original population target of 7,400 elk in 2008—approximately 11 years ahead of schedule.

The takeaway? With enough help from wildlife managers, the reintroduction efforts are promising. Elk are resilient critters, and we just might be hunting them in West Virginia sooner than we think.