Mule deer in the West are struggling, and overall populations will decline if the drought persists 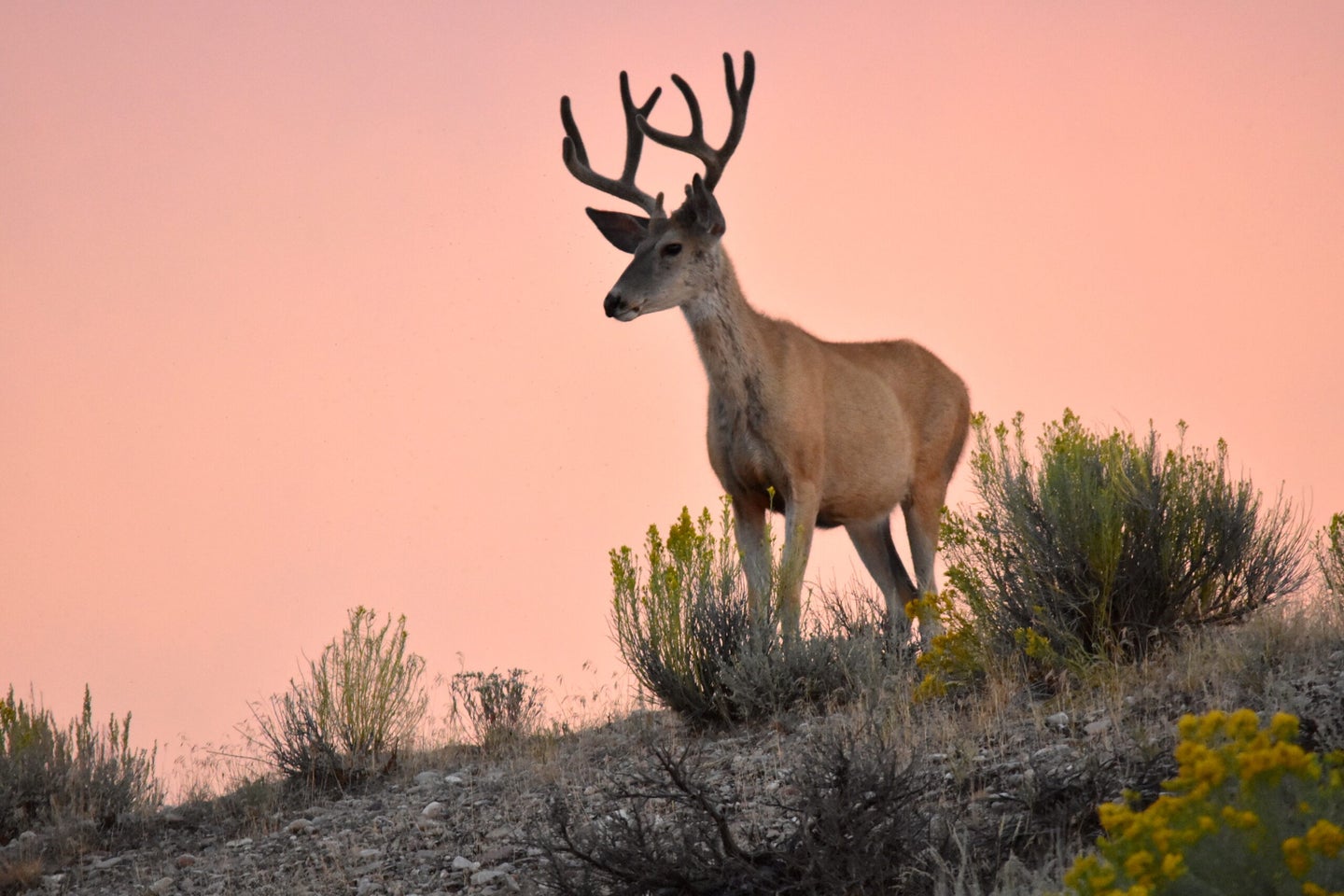 From 1985 to 1991, a mule deer herd in California’s Sierra Nevada range plummeted from almost 6,000 animals to fewer than 1,000. Fawns died. Others simply weren’t born because adult females keeled over in the winter or were killed by predators. The cause? Drought. For many of those years in the late 80s, precipitation was 27 percent of normal.

“If you don’t get the moisture, you don’t get the food, and deer pay the consequences for it,” says Kevin Monteith, a long-time mule deer researcher. For anyone wondering what the extreme drought currently plaguing the western half of the U.S. will do to big game populations, just look to that Sierra Nevada herd’s constant decline over a handful of years. It’s a pretty realistic example.

That’s the thing about drought: It’s more insidious than one bad winter, which litters the countryside with carcasses. Drought evaporates water from soil, depletes drinking sources, prevents shrubs from producing new growth, and stops grasses and flowers from sprouting.

Deer may survive portions of the year with limited food and, like any population, mule deer can recover given renewed precipitation and more food the following year. Fewer mouths competing for food on the landscape can even lead to healthier animals. What concerns some researchers most is the increased frequency and severity of droughts throughout the West. Herds can only handle so much before their populations continue to decline, not just from the lack of food, but from problems exacerbated by hunger, including susceptibility to disease and predators.

But just how severe those population declines will be, and where they will occur, is the subject of debate among experts, many of whom are concerned about deer all the way from southeast Alaska to Mexico. But Jim Heffelfinger, Arizona Game and Fish’s wildlife science coordinator, says even with drought, the future for deer looks generally good.

“There are a million things to be paying attention to,” he says. “There’s no overarching feeling of doom that mule deer are done. They will continue to thrive as long as we don’t screw up their habitat.”

No Water, No Food

Look at any given mule deer herd in states like Wyoming, Montana, or Idaho, and they follow the same pattern. Deer spend winters on hard-scrabble ground, nibbling tips of mountain shrubs from already-nibbled-down shrubs as they try not to die. By spring, most are ready to move, noses down, following green grass from wind-swept, lower-elevation winter range to higher, wetter country. They eat most of the journey up, then spend the summer munching as many high-calorie plants as possible before winding back down and starting the cycle again.

In Arizona, the opposite is true. Deer spend summers, when temperatures regularly reach well over 100 degrees, hunkered down. After summer monsoon rains and winter storms, they can fatten up on plentiful food before another blistering summer. Drought in the desert southwest means less food in the winter, which translates to a diminished ability to survive the crushing heat. Hefflefinger has watched this pattern play out before, most recently the last couple of years when deer were so skinny he could count their ribs.

“It was pretty dire, and it got worse and worse,” he says. “In the southwest, we got no summer rain and hardly any winter rain.”

So bad, in fact, that until recently 95 percent of Arizona was in severe or exceptional drought. Not only is drought impacting respective winter and summer ranges for deer, it’s also limiting good food during migration, which is one of the strategies deer developed to survive harsh climates and grow into trophy animals, according to recent research by Ellen Aikens through the University of Wyoming.

Aikens looked at 19 years of drought data and compared it with several years of deer GPS collars. During normal years, deer had about 120 days to feast along their migration routes. In dry years, they had as few as 60 days.

“The shorter window of green-up caused by drought reduced the opportunity to accumulate forage resources during rapid spring migrations,” the paper reads.

Fewer plants on the migration route and either summer or winter range, depending on the region, equals skinnier deer. Because deer are a relatively long-lived species with opportunities to reproduce each year, they will prioritize their lives over a fawn. It’s called the “selfish mother hypothesis,” and it suggests that when resources are limited, a doe’s body will withhold resources from a fetus or fawn, or both if the drought persists.

“Her fawns are less likely to survive or recover,” says Monteith, “but it will ensure her survival during subsequent seasons for another chance to reproduce.”

Reproduction can make up ground in good years when the rains come back and heat subsides. It’s when adults start dying that the population takes a real hit.

A Dry Future for Deer

Just how bad has drought been in the West? Really bad.  Drought isn’t new to an arid landscape like Nevada, Utah, or even Montana. But states across the Southwest in 2020 were either the driest (Utah and Nevada) or second driest they’ve been since records began in 1895, according to the National Centers for Environmental Information.

Lake Powell has the lowest water levels since the government started filling the Colorado River reservoir in the 1960s. Lake Mead is also recording historically low levels. The southern portion of the Great Salt Lake as also reached a new historic low, according to the U.S. Geological Survey, overtaking the previous low-water record set in 1963.

Researchers have taken to calling it a “megadrought,” one we’ve been in since at least 2000. And the future doesn’t look like it will be much better. Brad Udall, a senior climate scientist at Colorado State University, recently told the New York Times, “I’m struggling to come up with words to describe what we’re seeing here.”

Water levels in massive Southwestern reservoirs don’t do much for deer. They’re not necessarily depending on Lake Mead, for example, for their drinking water. But they indicate the dire situation deer are dealing with. Reservoirs on the Colorado River contain snowmelt from Colorado and Wyoming snowpack. Less snow means less moisture for food. Less moisture for food, as Monteith and other researchers have said, means less—or, in some cases, no—new growth and struggling deer.

“It exacerbates everything else,” says Tom Stephenson, wildlife supervisor for the California Department of Fish and Wildlife. “All of these cumulative effects have a more combined detrimental effect on the species.”

Fortunately for mule deer hunters in the West, there are still a lot of mule deer. In fact, the Western Association of Fish and Wildlife Agencies estimates there are roughly 3.5 million mule deer in 21 Western states and Canadian provinces in its annual “Range-Wide Status of Black-Tailed and Mule Deer.” (These estimates do come with many a caveat, including possible inclusion of whitetails in the deer count).

The status of those herds, however, is a different question. Many of them are listed as below population objectives this year. Deer populations plummeted in the late ‘90s and well into the 2000s, causing frequent troubleshooting by experts and outcries from hunters across the region. Most populations then stabilized, or even climbed back up a bit, but remain hamstrung from achieving previous high numbers. This is largely due to drought, habitat loss, severe winter weather, and disease.

The report formally explains that black-tail and mule deer populations are increasing in six areas, stable in 10, and decreasing in seven. Most states are experiencing a situation like Colorado’s. For many years, Colorado has housed about 600,000 mule deer. Those numbers have dropped by a third to around 400,000 and have now stabilized for the last 11 years around 420,000, says Andy Holland, big game manager for Colorado Parks and Wildlife.

“I would like to think we can do enough habitat treatment to make up for drought, invasive plants, development. But it’s not realistic to even hope to get back to where we were 20, 30, 40 years ago,” Holland says. “And when I look at the landscape and our winter range and the expansion of human population in Colorado, I am definitely worried.”

Some states are more stable now. Montana, for example, has had relatively consistent numbers, particularly in the eastern two-thirds of the state. Even Arizona, which dipped after the last couple years of drought, could bounce back now that it’s raining, and as long as that rain continues. Wildfires and beetles are killing trees, Hefflefinger says, but they’re also opening the forest floor, allowing space for more plants and grasses, which are ultimately a boon for deer.

But talk to researchers in Wyoming or Nevada, and you’ll hear a different story. Deer in Wyoming have declined by more than 30 percent in the last several decades for all the same reasons as everywhere else, Monteith says. That means drought, diseases like chronic wasting disease, habitat loss through lack of fire and invasive species, and hard winters.

Nevada’s deer population has been declining for decades, too, for those reasons, plus competition from feral horses and burros, according to the Mule Deer Working Group report.

California is a mixed bag. Deer numbers are relatively stable after the decline in the ‘90s, but “this generalized trend may not apply to individual populations subject to unique conditions.” In other words, estimates for the huntable portion of California deer (those not living in urban areas) have fluctuated between 400,000 and 700,000 in the last 30 years.

So What Can Deer Managers Do About Drought?

If numbers continue dropping because of drought, deer managers are relatively limited in what they can do. Feeding mule deer often doesn’t work.

Wildlife managers can reduce tags to keep pressure down, though many have already stopped hunting does in certain areas. Ironically, the answer to more resilient herds can sometimes be die offs that lower numbers, Monteith says.

Deer in the Wyoming Range Herd in southwestern Wyoming—one of the largest in North America at more than 30,000 animals—dropped from a high of about 55,000 during the winter of 1992 to 1993. They crashed again in the winter of 2016 to 2017, and while the population hasn’t yet recovered, biologists recorded the fattest mule deer—in nearly a decade of research—after that die off.

Remember the Sierra Nevada herd? It eventually bounced back, too, from 1,000 to 1,900 with rain and snow, but never came close to its previous highs of 6,000.

“The abundance leading up to the drought was likely more than the range could support anyway, and the population plummeted,” Monteith says. “So deer reached a new balance, a new carrying capacity.”

Habitat projects can help. Habitat managers are working regularly to try and eliminate cheat grass or other invasive species and replace them with native shrubs. Prescribed burns in some places can boost food, too. Protecting winter and summer range and migration routes is key. But no matter who you ask, a future with persistent drought—and less food—is bad for mule deer.