Louisiana wildlife was hit hard after a pipeline ruptured last month. Thousands of fish died, and officials captured more than 70 gators that were coated in diesel 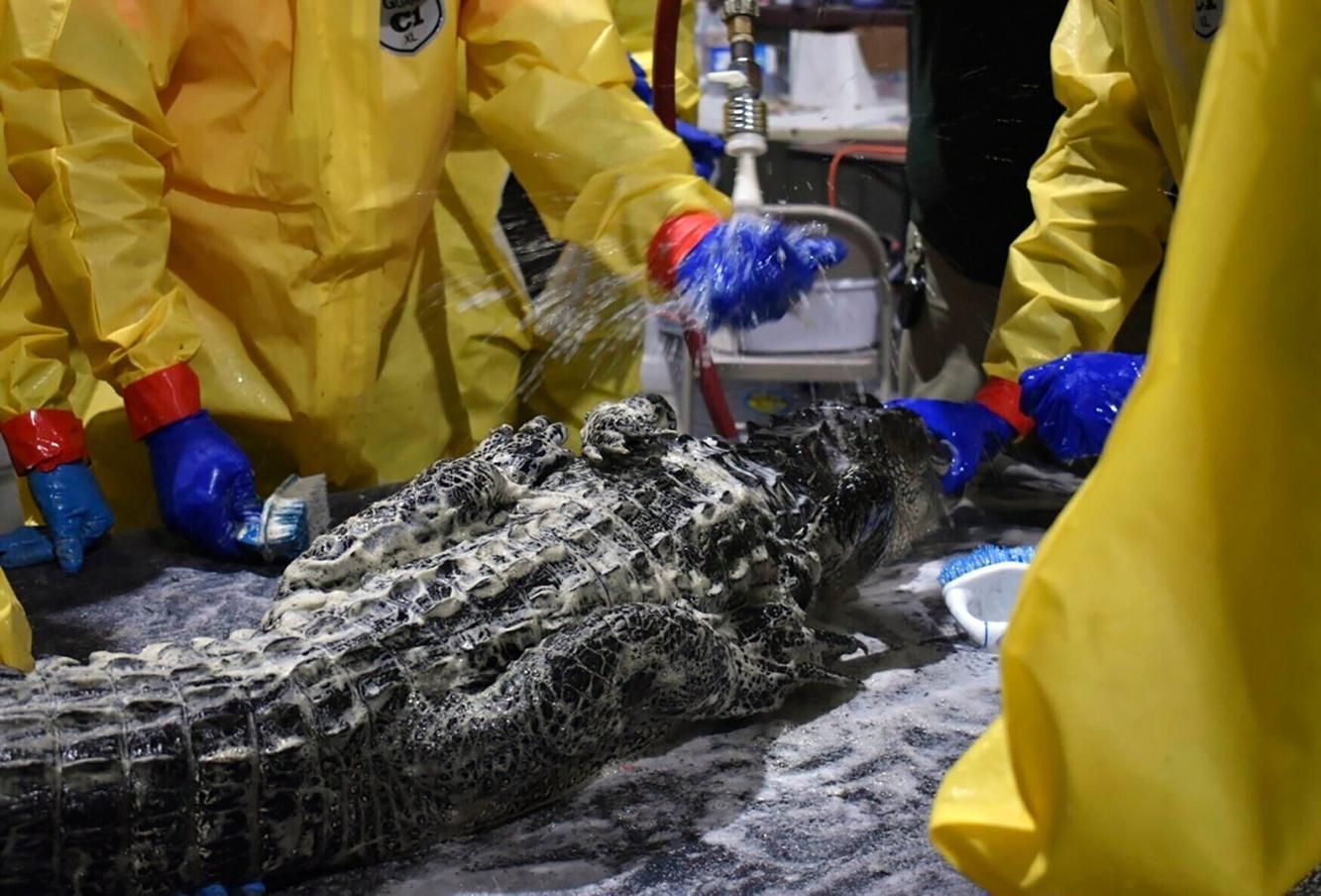 In addition to scrubbing the diesel off the alligators' hides, wildlife rehabilitators also had to brush their teeth. Louisiana Department of Wildlife and Fisheries
SHARE

Wildlife officials with the Louisiana Department of Wildlife and Fisheries spent days scrubbing dozens of alligators last week after a diesel spill caused extensive environmental damage to a wetland area near New Orleans. LDWF confirmed that the spill killed approximately 2,300 fish and more than 100 other animals, including snakes, birds, eels, and crabs, according to the Associated Press.

Officials with the agency also captured nearly 130 animals for rehabilitation, including more than 70 alligators that were coated in diesel. Wildlife rehabilitators then set about the unpleasant and unusual task of deep-cleaning the gators. LDWF oil spill coordinator Laura Carver told the Associated Press that this process required eight people per alligator. Four were designated as “holders”, while the others hosed and scrubbed the tough-skinned reptiles—a few of which were more than 8 feet long.

Then came the really fun part: cleaning the alligators’ teeth. Carver said rehabilitators used “an old-fashioned mop handle” made of wood to hold each alligator’s jaw open so they could scrub its teeth with hot water and Dawn dish soap. “They literally get their mouths washed out with soap. But it’s the only thing that works,” Carver said. She also added that, to her knowledge, the agency has never had to rehabilitate that many alligators at one time. Altogether, LDWF had rescued 78 alligators as of Friday, Jan. 15. Three of these gators were euthanized, while 33 of them had already been cleaned, rehabilitated, and released into the Bayou Savage National Wildlife Refuge approximately 10 miles from the spill site.

The spill that was discovered on Dec. 27 was traced to a pipeline that had ruptured near a levee in St. Bernand Parish, which lies just east of New Orleans. Known as the Meraux Pipeline, the 16-inch-diameter, 125-mile-long pipeline runs from Chalmette to a storage terminal in Collins, Mississippi. It is owned and operated by Collins Pipeline Co., a subsidiary of New Jersey-based PBF Energy, which owns the Chalmette petroleum refinery along with five other refineries in the U.S. According to the A.P., federal records show that the company knew the pipeline was badly corroded. An October 2020 inspection of the line revealed extensive corrosion along the same 22-foot section of pipe that ruptured in late December.

State and federal officials say that Collins Pipeline Co. shut down the pipeline as soon as the ruptured pipe was discovered, but by that point, more than 300,000 gallons of diesel fuel had already spilled into the wetlands surrounding the levee. Michael Karlovich, vice president of communications for PBF Energy, told CNN that as of Jan. 13, the company had recovered more than 320,000 gallons of diesel fuel from the spill site.