3 Tips for Choosing and Customizing Traditional Arrows for Big Game

When it comes to arrow penetration on big game, weight—not speed—counts most 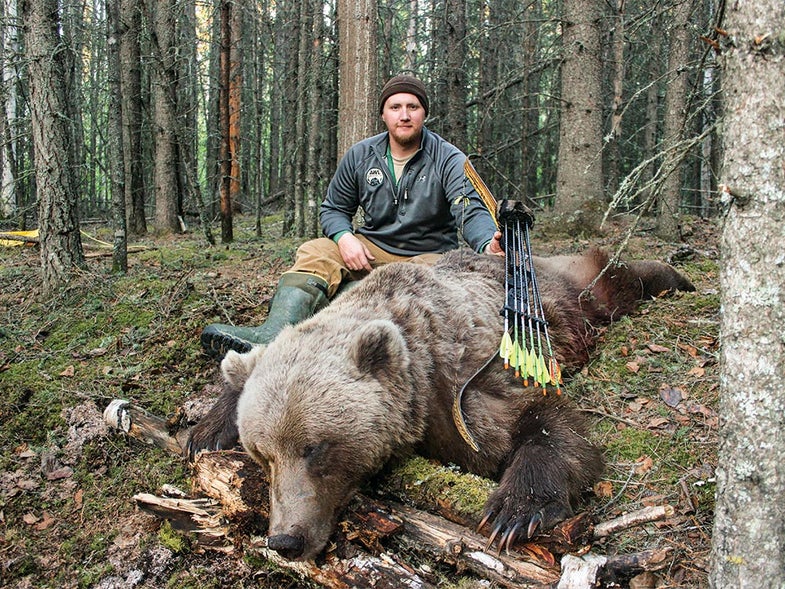 The author with a big Alaska grizzly taken with his recurve. Tyler Freel
SHARE

It was past midnight—twilight in June in Alaska—when the bear approached. My heart was racing; he’d already come through twice without offering a shot. As he closed the last few yards to the bait, it was clear he was on edge. He took one more step, and I drew my longbow. At the twang, my bright-green feathers disappeared into the pitch black behind the bear’s shoulder. He scrambled out of sight but quickly piled up dead just 60 yards away. It was the biggest black bear I’ve ever taken with a bow, and coolest of all, I’d killed him with a wooden arrow and knapped stone broadhead. This reinforced what I’ve come to learn about arrow penetration on big animals. The key to pass-throughs with a stickbow is in the arrow setup.

I’ve taken quite a few black bears and four grizzlies with traditional archery equipment . My longbow is 52 pounds and shoots just 152 fps with those stone-point arrows—but it shot through a 7-foot bear. Using traditional equipment on big animals has taught me this: If you want more penetration, understand that arrow mass and a solid, cut-on-­contact broadhead are more important than arrow speed.

Lighter hunting arrows became the norm as bowhunters got caught up in the speed craze. But many of today’s savvy hunters are reconsidering their setups and sacrificing some speed for a heavier oomph. Any modern compound set at 60 pounds or heavier should give you complete penetration on deer-size game on virtually every shot. If it doesn’t, the arrow and/or broadhead is probably to blame.

A heavier arrow will flat-out penetrate better than a light one, but I don’t get hung up on specifics. Personally, I don’t use anything lighter than 550 grains—and 600-plus grains is better.

You won’t find arrows that heavy ready to go at your pro shop, so you’ll probably have to custom-build them to get the desired finished weight. Most standard carbon hunting arrows weigh 6 to 10 grains per inch, depending on style and spine. Opt for the heaviest you can get, and then look to your components for the finishing touches.

For standard-diameter shafts, I like Easton Brass HIT inserts over any sort of outsert. These have standard threading, and I recommend pairing them with a tough and heavy broadhead like the Cutthroat Single Bevel, Iron Will, or Valkyrie Archery Blood Eagle, some of which are available in weights of 250 grains.

The most recent grizzly bear I killed with this setup was a quartering-to shot with a 53-pound recurve. I hit him right through the shoulder, and the arrow zipped out the other side.

Using a stone point isn’t a new idea, but I had never tried it before the black bear hunt. The experience further cemented my opinions on heavy arrows and broadheads.

The finished wooden shaft and point, tied on with moose sinew, weighed 950 grains. Wooden shafts aren’t as consistent as carbon, but even with a sharp rock on the end, these flew great. Any doubts I had dissolved when that bear piled up dead within seconds.

The average hunter isn’t going to try a stone point, but that doesn’t change the takeaway. If you are willing to sacrifice a little speed in favor of an extra-heavy arrow-insert-broadhead combination, I bet you’ll be shocked by the increase in penetration you see on big game.