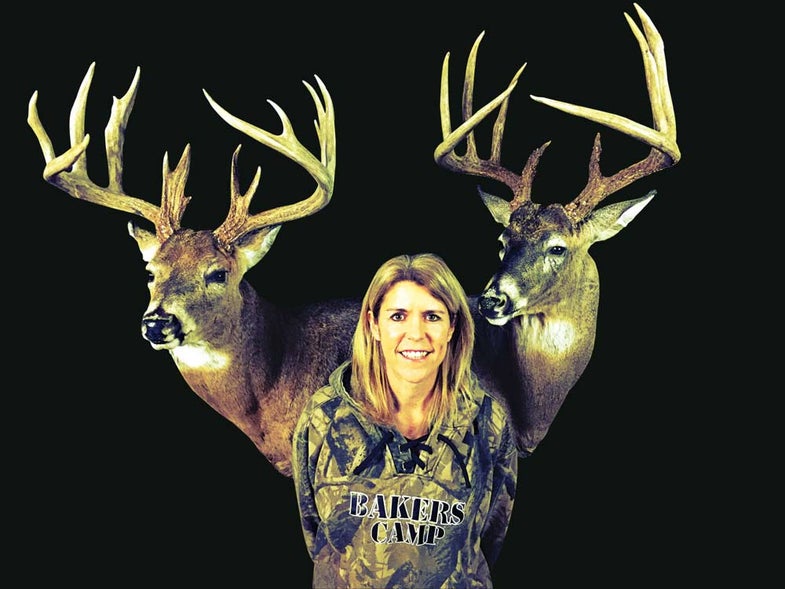 Whitetail obsessions seem to always begin with a fleeting glimpse, or maybe a story from a hunter who claims to have seen the biggest buck of their life. And I guess my story is no different—at least, it wasn’t at the outset.

With his crossing main beams that gave the appearance of a sideways figure eight, Infinity’s nickname seemed fitting. He was likely only a three-year-old, but with his unique rack, I knew that it would be hard to pass him up if he ever came in to range of my farm-country treestand in southern Indiana. I had a trail camera photo of him in 2014, and saw him once in mid-October and again late in the bow season. He didn’t present me with a shot either time.

In 2015, he had matured into a mid-160-inch deer. My one and only encounter with him that season was just minutes into shooting light on the morning of October 19. He walked right by my stand and was within bow range. I could clearly see my sight pin on his chest as he came to a stop. I let my arrow fly and watched as it sailed right over his back, completely missing him. I was sick to my stomach as I watched him saunter off. I guess in the low light and excitement, I must have forgotten to look through my peep. It was heart-wrenching.

A New Day and a New Buck

It was just a couple of weeks later that disappointment would turn to jubilation. After an unsuccessful morning hunt with my friend Sarah, I headed back into the woods on the afternoon of November 7. I climbed up my tree, pulled my bow up, and took my backpack off. I turned toward the tree to put a strap on it, and when I turned back around, there stood a giant buck 30 yards from my tree. It wasn’t Infinity, but it was a remarkable buck nonetheless—a shooter. I nocked an arrow, got my release out of my backpack, and drew my bow. I waited for him to walk into my sights, grunted him to a stop, and let my arrow fly. I hit my mark. As he ran off I prayed, “Please let him drop. Please let him drop.” He went about 60 yards.

He was a massive 13-point that I had never seen before that day. When my mom saw him, she named him Goliath. He was a Boone and Crockett buck with 198 ³⁄₈ total inches and a net score of 170 ⁴⁄₈. I never dreamed I would ever even see a buck that big in the places I hunt.

Although I could not have been more thrilled with Goliath, I couldn’t get Infinity out of my mind. I was pretty sure that he’d made it through that season but couldn’t verify my suspicions until I saw a trail camera photo late last September. He was now a five-year-old and had put on even more inches. I became instantly obsessed once more, but I felt certain that he would end up being somebody else’s trophy. After all, what hunter is fortunate enough to take back-to-back Boone and Crockett bucks? In hopes of getting Infinity on video, my brother Mike and I hunted together almost every day starting in late October. Infinity made an appearance on the afternoons of November 5 and 6, but he presented no shot.

November 8 was a rainy day, and Mike wasn’t able to hunt with me, but I knew I needed to be in a treestand. That morning I saw two 3-year-old bucks and four does. I got down midday to run home and dry my clothes out. I checked out the weather forecast, and it looked like it was going to stop raining about an hour before dark. I knew I needed to get back to my tree. This time I remembered my raingear. It was starting to get close to dark, and I hadn’t seen any action. I felt my phone vibrate with a text message from my mom. I decided to read it since I was pretty sure there were no deer around.

When I looked up, Infinity was standing there facing me at about 40 yards. He had come up the steep side of the big ridge I was on. My heart immediately began pounding hard in my chest. I eased my phone back in my pocket. I had my sliding bow sight set at 27 yards because there was a scrape and two other main paths that were 27 yards from my treestand. He started walking toward the scrape, and I was able to get my bow in my hand. He stopped before he got to the scrape, but I couldn’t get a shot because there were too many limbs in the way. He stood there for what seemed like a long time and then changed directions and started walking off. I looked for an opening. I ranged the distance—it was 24 yards.

I drew my bow and grunted in hopes of stopping him, but he kept walking. I grunted again, even more loudly, but to no avail. He was about to walk out of my shooting lane and probably out of my life forever. I settled my pin on his chest and let my arrow fly. It hit him a little high and farther back than I would have liked. A bittersweet wave of emotions overcame me. I was overcome with excitement because I had just put an arrow in a buck I had been pursuing for three years, but I was sick to my stomach because I wasn’t sure of the shot.

Taking the advice of my brother, I decided to wait until morning to look for him just to be safe. As you can imagine, it was a sleepless night for me, but it didn’t take long to find him. I couldn’t believe it when I finally got my hands on Infinity. He grosses 187 3/8 and nets 180 7/8. I guess that makes two bucks in one lifetime.