Deer of the Year 2017: A Giant Wisconsin Opening Day Buck 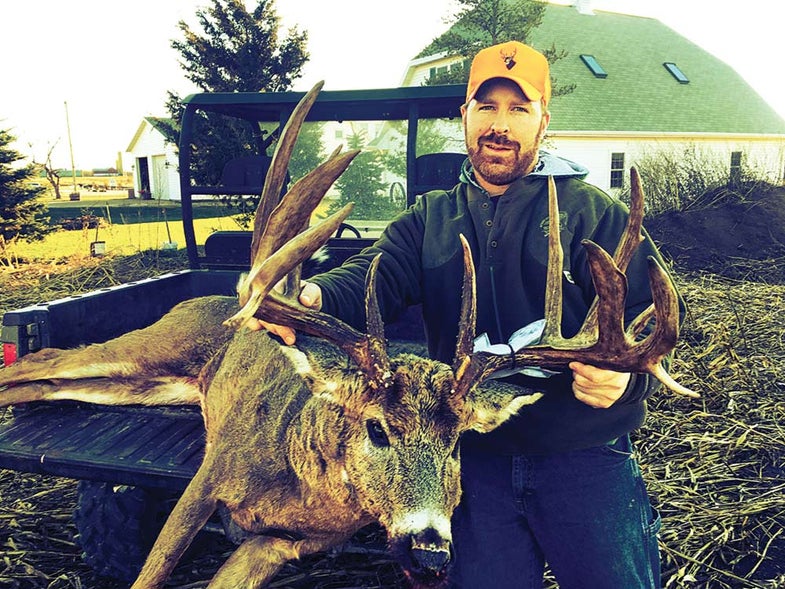 The late-November firearms season opener in Wisconsin always seems to provide challenging weather, and last fall it was no different. The forecast was not great—sustained 30 mph winds, gusting to 45 mph, with rain changing over to snow by morning. For once, though, I was prepared, having bought an enclosed box blind during the summer. I had a lot of help getting it into the proper position, but I was ready for an all-day sit. The only thing I was really looking forward to was spending some quality time in my blind and hoping to get a glimpse of a deer.

Big flakes of snow began to fall before daybreak and piled up fast. As it became light, the only thing flying past my stand was a sheet of white—until I looked out my window to the left to see a buck on top of a hill about 120 yards away. At first he stood there stock still, surveying the field below with his head held high. He was a good buck, and I was trying hard not to let myself get too worked up. But in order for me to get a shot, he had to come down off that hill and clear a distant house. Somehow, he got the message. He trotted down the hill in fits and starts while closing to 90 yards—and clearing the house. Now, however, he was lined up with a distant hunting camp. No shot. Then he was on the move once more.

Although I haven’t had a great deal of success with deer scents in the past, I still usually use them. I did that morning as well, spraying the outside of my blind with estrous scent before settling in for the day. I can’t be positive if it made a difference, but when the buck got directly downwind of me, he hit the brakes, sniffed the air, and started to swing his head to look directly at me. That was the hesitation I needed. Before he was able to make another move, my first round was on its way. I racked another shell in and found him in the scope, but a second shot wouldn’t be necessary. He went about 40 yards, slowed to a walk, and then tipped over.

It wasn’t more than a minute before my brother-in-law, who had helped me set up the blind, was texting me. A suddenly shaky hand made it difficult to hit the right buttons to reply. After several minutes, I finally managed to walk over to check out the buck. He looked huge all over—his body, hooves, and, obviously, his antlers. I hadn’t even noticed the drop tines. I just couldn’t wrap my mind around what lay in front of me. Score-wise, I had underestimated him and was in major denial about this being the monster buck most hunters dream of. It wasn’t until my cousin put a tape measure to the rack that it started to sink in. After the drying period, the 14-point officially gross-scored 206  2/8 inches, and ended up netting 196  1/8 inches after deductions. The buck field dressed at more than 200 pounds.