A hunter's first buck takes a spot in the record books 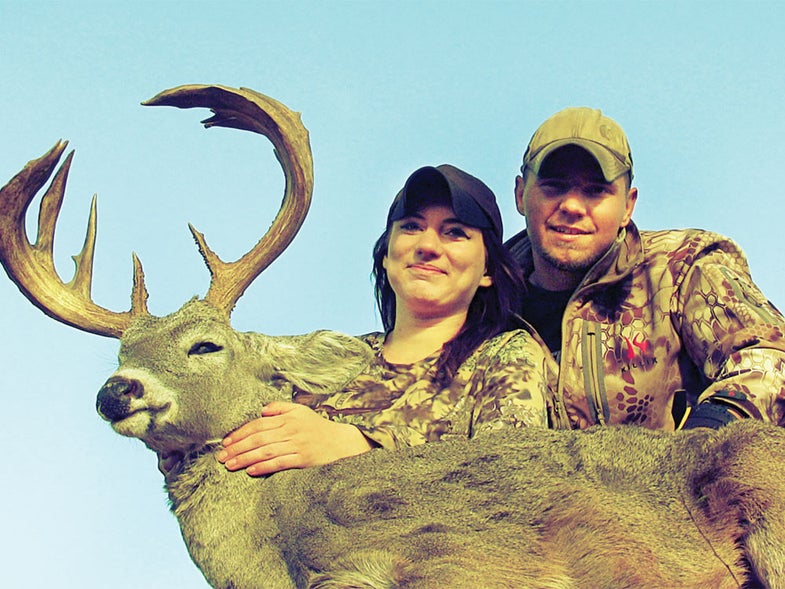 My breath stopped, as if someone had knocked the air out of me. I had only glanced at the buck for a fraction of a second, yet I knew instantly that he was the most beautiful thing I had ever laid eyes on—his thick mass of antlers towering above the grass from his bedded position.

“How many inches do you think he is?” I asked my boyfriend, Cory Hill, under my breath.

By now I was shaking. My hand holding up the gun ached, so I used the other to support the rifle’s weight. My eyes were still pinned to my target.

“I got this,” I muttered to myself, trying to keep self-doubt at bay.

It was our third day out hunting the rugged terrain of the Huachuca Mountains in southeastern Arizona, and it was the first time I had ever had a buck in my crosshairs. This eternity, which in reality was almost an hour, ended in one split second when he finally got out of his bed.

My heart seemed to miss a beat. I tried to steady my breathing. Cory coached me to take the safety off, but I was already on the trigger. I steadied the crosshairs, hesitated for only a second, and squeezed the shot off. Cory told me that he saw the rifle recoil, but I didn’t feel a thing.

“He’s down,” he shouted. “Hannah, we got ourselves a monster buck.”

Cory gave me a huge hug as I choked back tears. I was speechless. We made our way down the steep embankment, up another hill, and stumbled our way through the field to where he lay. I crouched down next to him. My hands slid across his thick horns, tracing each curve and point. I gently lifted his head to get a better look at his massive rack. It was an intricate mix of exhilaration and reverence, adrenaline and reflection.

This was my first buck. And not just any buck, but a giant Coues deer. His gross measurements were 136 ²⁄₈ inches. The Boone and Crockett record is 144 ¹⁄₈. After harvesting my first big buck, I suddenly had a clear understanding as to why so many devote their lives to this raw and rustic way of life.