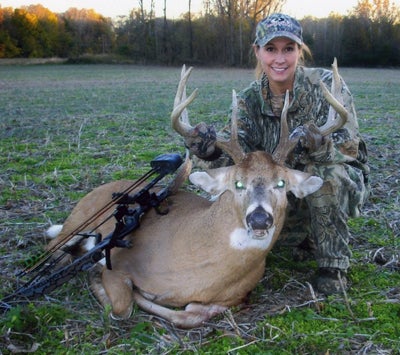 Stacy Rogers
Rossville, Indiana Stacy talked constantly about taking up archery, so finally, during the first week of October, her boyfriend, Don Pickell, decided to teach her. After less than two weeks of practice, Stacy could nail a bull's-eye at 20 yards. Don was impressed, so he got her a tag and took her hunting with him. On October 19, with Don by her side, Stacy shot her first doe and officially became a bowhunter. "My heart was racing. I knew I was ready for more," Stacy says. More was exactly what she got. Two weeks later, Stacy shot the dandy 1322/8-inch buck that had been haunting Don's trail cameras. Outdoor Life Online Editor
SHARE