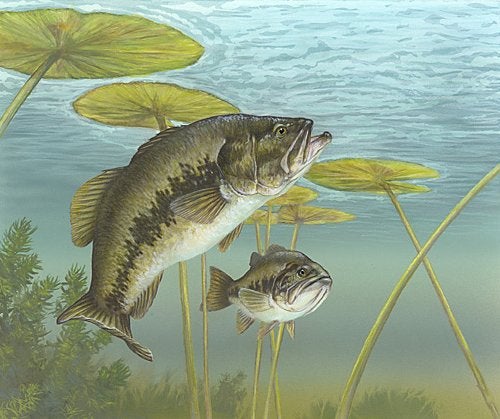 Professional anglers don’t earn a regular paycheck by randomly shotgunning lures across lake. As 1991 Bassmaster Classic champ Ken Cook knows, successful fisherman must nail down a particular pattern that guides them around empty water and ineffective lures so they can focus on certain baits and defined locations. The Oklahoma pro says there are three basic ingredients to establishing a pattern on any body of water: the specific region of lake, the structure of cover and the lure.

With those basic considerations in mind, Cook tries different lures, locations and retrievals until he starts catching bass regularly. It’s really nothing more than a process of elimination. Sometimes he pins down a pattern in an hour or two; sometimes it takes him all day to figure out exactly where the bass are and what they want. How long Cook sticks with a specific bait, technique or location depends on one thing: his confidence. He’ll make a change in as little as 20 minutes if he no longer feels good about what he’s doing.

When Cook catches his first bass of the day, he takes a mental inventory of the conditions, including depth, cover, bottom configuration and where his lure was when the bass struck it. He considers lure presentation, the size and color of the lure and the line he’s using. He notes environmental components such as wind direction, light penetration and water temperature and clarity. With all those variables in mind, Cook looks for similar spots in other parts of the lake.

“One fish doesn’t make a pattern, but it’s a good start. I’ll use that first bass as a way to start whittling down a general pattern,” notes Cook. “If I catch a few more bass doing the same thing, I’ll know I’ve got the pattern nailed down pretty good, and I’ll start focusing on those areas and techniques that produced the first three or four fish.”

BRIGHT SUN, HOT WATER temperatures and heavy fishing pressure can drive largemouths under cover. Florida bass pro Shaw Grigsby knows that floating vegetation serves as a roof of sorts, providing bass with critical shade. When he finds mats of floating weeds, Grigsby uses a heavy weight and a slim soft-plastic lure to bust through the cover.

Bigger bass hold in deeper water under mats. In the hottest weather, Grigsby will put his bait as far as 30 feet inshore from the outside edge. In low light, fish tend to hold closer to the outside edge.

PRO TIP: Apply Spike-It attractant scent spray to the bait, and reapply after every few casts. Not only does the spray draw bass, but the scent oil lubricates the lure and allows it to slide through the vegetation more easily.

WHEN THE SCORCHING SUN pushes bass to deep water, California pro Ish Monroe reaches for a topwater lure and makes a long casts over and around deep main-lake points. It’s tactic that works best during the middle of the day. Monroe’s go-to lure is a Reaction Innovations Vixen, a walking surface lure. He first casts the floater across the end of the point, then parallel to it, and finally he works the lure over the structure from a variety of angles. The clearer the water, the longer his casts need to be.

If points don’t produce, Monroe will fish aquatic grass and flooded bushes in the backs of pockets with a white Snag Proof Pro Series Tournament Frog. This tactic is viable at any time of day, even under a high, bright sun.

TECHNIQUE: Casting topwaters over and parallel to tapering points in clear water.

TACKLE: Team Daiwa Advantage bait-casting reel with 6.3:1 gear ratio and 7½-foot Heartland fiberglass rod. Thirty-pound-test Power Pro braided line is best because of its strength and lack of stretch when setting the hook over long distances.

PRO TIP: For added attraction, put a feathered treble hook at the tail of the Vixen. Bass will often hit the feathers and get caught by the trailing hook.

VETERAN WALLEYE PRO GARY ROACH targets river wing dams in summer. Walleyes stack up on the backsides close to the fast water and are vulnerable to leeches, minnows and night crawlers offered on a three-way dropper rig. Roach’s version includes a 1- or 2-ounce sinker and a bare hook tipped with live bait that rides about 2 feet off the bottom. The hook is attached to 3 feet of monofilament, which is tied to the three-way swivel. Roach casts the bait into the swirling eddy off the tip of a wing dam and works is slowly across the bottom.

TIDAL RIVERS ARE BASS factories, but even red-hot action can come to a grinding halt when the tide stops. When the fishing gets tough, Virginia pro Wood Daves adjusts his location and continues targeting active bass. He shifts to the inside edge of aquatic vegetation on a flood tide, where he often finds a band of open water between shore and any grass bed. He favors contained banks–those with an abrupt, defined shoreline that keeps the bass from roaming far up into shallow flooded vegetation. Daves moves his boat down the line of open water and throws a Bass Pro Slim Dog, a small walking surface bait that might draw a reaction bite from active and inactive bass. He works it with a rapid cadence, giving it three twitches before letting it pause for a second. Daves stalls the bait next to laydowns, grass points or other bank irregularities.

PRO TIP: Bass don’t like to stray from cover during periods of a still tide, so put the lure close to laydowns and weed beds as possible.

5 Trolling the Windy Side

WARM WATER AND wandering baitfish put lake walleyes on the move, so Wisconsin angler Dean Arnoldussen rigs up as many as six rods and trolls with night-crawler harnesses or Rapala Shad Rap crankbaits. He looks for wind-blown banks and reefs, where open-water baitfish often congregate due to wave action.

To increase the amount of water he covers, Arnoldussen relies on planer boards and sets his lines for a variety of depths, from 5 feet to as deep as 20 feet. Different weights, along with varying lengths of line, dictate bait depth. As he moves across the water, Arnoldussen uses his electronics to follow contours, keeping the boat in the same general depth range. Once he starts catching fish, he marks the spots on his GPS and sets all his baits at the same depth range before making another pass.

LURE: Night-crawler harnesses with spinner blades if various “hot” colors such as yellow or chartreuse, or crankbaits that match favorite forage in the lake.

PRO TIP: Use line-counter reels, which tell how much fishing line is out. Reset all lines accordingly when strikes occur at a specific depth.

GIVE GREG HACKNEY a blistering hot, sunny day and he’ll head straight for horizontal cover. He fishes docks, laydowns and anything else that provides shade–the more the better. His favorite tactic is to cast a Strike King 4S chartreuse/green crankbait far up under fixed docks and around fallen trees. Hackney doesn’t cast once and then move on, however. He hits the cover as many as 15 or even 20 times.

If crankbaits won’t work around the shallow cover that Hackney prefers to fish, the Louisiana bass pro will swim a black/blue jig around the same cover, pulling it through the water with a steady, fast retrieve and hoping for a reaction strike.

PRO TIP: Make several casts to the same cover. Fish the lure fast and bump it into as much cover as possible.